The government in Bangladesh has agreed to increase the maximum punishment in rape cases from life imprisonment to death, amid mass protests sparked by a recent series of sexual assaults.

President Abdul Hamid is expected to issue a special ordinance amending the Women and Children Repression Prevention Bill and enact the legislation as parliament is not currently in session, Cabinet spokesman Khandaker Anwarul Islam said on Monday.

The government has also agreed to a proposal that rape trials will be completed in a speedy manner, Islam said. Currently, capital punishment is allowed in Bangladesh only in cases where the victim dies.

The president may issue the ordinance on Tuesday, according to Law Minister Anisul Huq.

The legislative push follows a series of violent sexual attacks in recent weeks. Protests broke out in the capital Dhaka and other parts of the country after a video was posted on Facebook showing a group of men stripping and attacking a woman in a southeastern district. The National Human Rights Commission found the woman in the video had been raped repeatedly and terrorized over the last year.

Women’s rights group Ain o Salish Kendra said that 889 rapes occurred between January and August this year alone, with at least 41 of the victims dying.

Human rights groups say the number of incidents of rape in the country has surged, with many going unreported.

Protesters demanded the resignation of the Bangladeshi interior minister over what they said was a failure to address the alarming rise in cases of sexual violence against women and girls.

Many rape victims have been unable to get justice because influential people were involved in some of these incidents, according to demonstrators. They also accused police of hesitating to arrest rapists, while many of those who did get arrested were released on bail.

Road Transport and Bridges Minister Obaidul Quader said on October 5 that the ruling Awami League-led government cannot avoid the responsibility of taking action after incidents of violence against women, including rape. 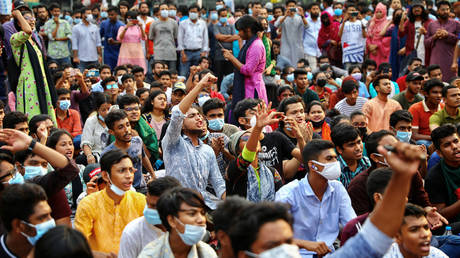