Azerbaijan’s president has called on his French counterpart to apologize for his recent claims that Syrian soldiers have been funneled into the disputed Nagorno-Karabakh, where Baku is fighting against Armenian forces.

“There are no mercenaries. We have an army of 100,000 soldiers,” Azerbaijan President Ilham Aliyev said in an interview with Al Arabiya on Sunday. “I demand that France apologize and show responsibility.”

Last week, French President Emmanuel Macron made the headline-grabbing claim that he had “reliable information” indicating that members of certain Syrian “jihadist groups” had arrived in the flaming Nagorno-Karabakh hotspot through the southern Turkish city of Gaziantep.

Armenia, whose forces are fighting a heavy battle over the disputed mountainous enclave with neighboring Azerbaijan, voiced similar allegations. It directly accused Turkey of ferrying in “mercenaries” to support its ally Azerbaijan’s war effort. Baku has brushed off those claims, dubbing them “cheap propaganda.”

Officials in Baku maintain that the country’s military is well-staffed and doesn’t need any foreign manpower. “Azerbaijan doesn’t need any third-party participation,” Hikmet Hajiyev, a senior adviser to the president, told RT.

The nation of 10 million people has “enough of our own resources” and also “enough reserve potential” to carry on fighting, the official stated. He also insisted that Turkey, which reaffirmed its unwavering support for Azerbaijan, isn’t involved in the conflict “as a third party.” Ankara also denied sending Syrian mercenaries into Nagorno-Karabakh.

The semi-frozen conflict over Nagorno-Karabakh escalated dramatically on September 27, following an exchange of fire between the Azerbaijani and ethnic Armenian forces in the disputed region. Casualties mounted throughout last week as the rival sides deployed heavy weapons systems on the frontline and engaged in conventional warfare involving tank skirmishes, as well as artillery and rocket strikes. 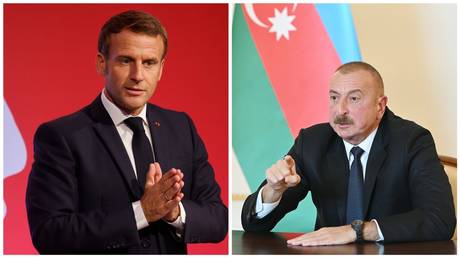