The first official government delegation from Bahrain was sent to Israel on Wednesday as the two states try to broaden cooperation, despite objections from Palestinians.

Bahrain’s foreign minister Abdullatif Al-Zayani headed the delegation aboard a Gulf Air flight. It was the airline’s first commercial flight to Tel Aviv, and its number, GF972, was a reference to Israel’s telephone country code.

Israeli media report that no new agreements are expected to be signed during the visit, while sources claim that diplomats are working on deals regarding tourism, scientific research, technology and health.

US President Donald Trump’s Middle East envoy Avi Berkowitz was also on the flight from Bahrain which flew over Saudi Arabia.

Bahrain followed the United Arab Emirates (UAE) in agreeing to establish full diplomatic ties with Israel earlier this year, after the Trump administration had brokered the deals since September. Sudan has also agreed to establish ties with Israel as part of its agreement with the US. The deals came despite a previous Arab consensus that formal recognition should only come in return for concessions in the peace process between Israel and Palestinians.

Palestinian groups on Wednesday condemned the planned meeting between the US, Bahrain and Israel delegations in Jerusalem. The talks in Israel are a “clear attack” on the rights of the Palestinian people, according to the Palestinian National and Islamic Forces Committee. The statement also reiterated that Palestinians reject the normalization process between some Arab states and Israel. 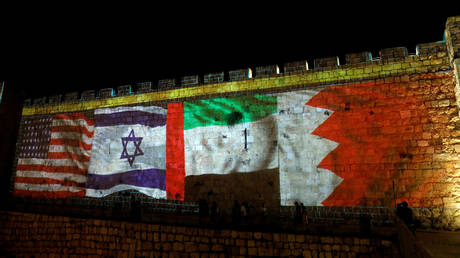 ‘Merkel must go, democracy must st...