The reopening of the American consulate in Jerusalem mulled by US President Joe Biden is a “bad idea” that will send a wrong message to Palestinians and the international community, Israeli Foreign Minister Yair Lapid has warned.

The US Consulate General in Jerusalem, which had served as America’s de facto embassy to the Palestinians since the mid-1990s, was shut down in March 2019. Then US president, Donald Trump, claimed that the mission had become irrelevant after he controversially moved the US embassy in Israel to Jerusalem, which is claimed as their capital by both Israel and Palestine.

But after taking over the White House, Biden, who is a strong supporter of the two-state solution to the Israeli-Palestinian conflict, made it clear that he wasn’t going to stick to all of his predecessor’s friendly policies towards Israel. One of the moves announced by the US administration in line with the changed strategy was the reopening of the Jerusalem consulate. It was initially going to resume operations in May, but, according to Israeli officials, Washington agreed to postpone the reopening until November so that Israel’s new government could approve the budget and avoid turmoil in the fragmented ruling coalition.

The issue was reportedly raised again during last week’s visit of Israeli Prime Minister Naftali Bennett to Washington, with Biden making it clear that his plan to bring back the mission was still on the cards.

According to the Israeli foreign minister, it could also “destabilize” what he called the “interesting yet delicate” structure of the Jewish State’s government. “I don’t think the American administration wants this to happen,” he stressed.

The Israeli cabinet is composed of seven parties with different political views and agendas, who only united in June by the shared desire to remove longtime Prime Minister Benjamin Netanyahu from power.

New PM Bennett was quite assertive when asked about the reopening of the Jerusalem consulate by the New York Times last month, insisting that “Jerusalem is the capital of Israel. It’s not the capital of other nations.” 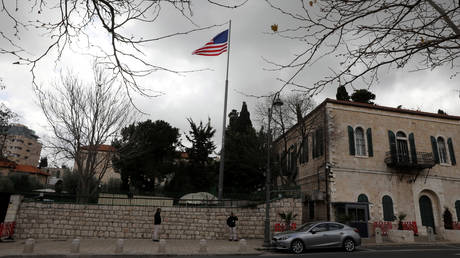