Police used water cannons and batons against protesters who stormed the parliament in Azerbaijan’s capital Baku. The crowd demanded mobilization amid border escalation with Armenia, but officials said that it’s unnecessary.

Parliament’s Protocol Office told reporters that the rioters caused some “damage” on the building’s first floor before being driven out.

Thousands gathered for a spontaneous rally in downtown Baku on Tuesday night. The crowd demanded that the government announce “mobilization” and take swifter action against Yerevan. After the rally became increasingly unruly, police deployed water cannons to disperse the protesters and clear the square outside of parliament.

Several people were arrested. Authorities launched a criminal investigation into the civil disturbance and the unlawful break-in at the parliament building.

Azerbaijan’s State Mobilization and Conscription Service later clarified that right now there is “no need” for any additional mobilization.

Clashes erupted along the northern part of the mountainous Armenia-Azerbaijan border on Sunday and continued through to Tuesday evening. The neighboring states blamed each other for the aggression and reported intense shelling by tanks, grenade launchers, and mortars. Both Yerevan and Baku reported casualties among their personnel.

In the early 1990s, Armenia and Azerbaijan fought a bloody war over Nagorno-Karabakh, a large Armenian-populated enclave inside Azerbaijan that declared independence from Baku. The large-scale fighting ended with a ceasefire agreement that resulted in Nagorno-Karabakh becoming de facto independent from Azerbaijan and closely allied with Armenia. 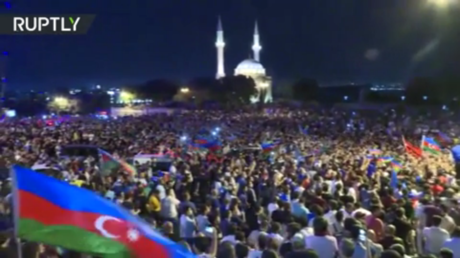