At least two soldiers have been killed in a border clash between Armenia and Azerbaijan, Baku says. It is the latest flareup in a decades-old conflict between the two states.

The clash happened on the Armenian-Azeri border on Sunday at about midday local time, both sides confirmed.

The exact details of what had happened have yet to emerge. The Azeri side said Armenian military broke a ceasefire agreement and shelled its positions with artillery, prompting retaliation. It said both sides suffered casualties, adding that two of its troops were killed and five others injured.

According to the Armenian Defense Ministry, the flareup started after soldiers from the other side attempted to cross the border in a vehicle.

The trespassers were forced to abandon their transport and flee back by the Armenian military, but soon afterwards the Azeri military launched a cross-border attack, the Armenians said. The statement said no Armenian troops were hurt in the clashes.

Armenia and Azerbaijan have been sworn enemies since gaining independence in the 1990s. The focus of their conflict is Nagorno-Karabakh, a predominantly Armenian region landlocked inside Azeri territory, which Baku considers to be under its sovereignty and Yerevan treats as an independent friendly nation.

Armenian militias in Nagorno-Karabakh fought a successful six-year-long guerrilla war against Azerbaijan.The latest major flare-up between Armenia and Azerbaijan happened in April 2016, when the nations fought for four days and deployed heavy weapons, including tanks and aircraft. The battles had claimed the lives of over 90 troops on each sides and killing over a dozen civilians. 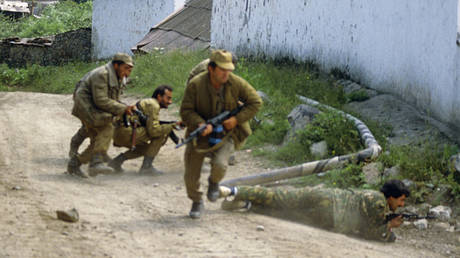