One of Australia’s largest islands is reverting back to its indigenous title, as Queensland’s environment minister admitted that the Western name is “quite offensive” to Aboriginal Australians due to its bloody history.

Fraser Island – a World Heritage Site, and the sixth-largest island in Australia – will revert to its pre-colonization name K’gari, which translates to ‘Paradise’.

According to local reports, Queensland is currently in the final stages of changing the island’s name, and the World Heritage Committee has also given its approval, though a symbolic naming ceremony was held earlier this month.

During the ceremony, Queensland’s minister for the environment, Meaghan Scanlon, said that “a lot of people don’t realise” the island’s current name is “really quite offensive to a lot of the traditional owners” and that the Aboriginal community has been advocating for a name change for many years.

K’gari was renamed Fraser Island in the 1800s after a Scottish woman, Eliza Fraser, became shipwrecked on the island and claimed to have been captured and abused by its native inhabitants – an allegation disputed by other survivors of the shipwreck.

Fraser claimed on her return to the UK that the ship’s crew and passengers had been captured by “savages” who stripped the survivors naked, murdered her husband, “roasted alive” a woman “over a slow fire,” and “tortured, speared, and wounded” Fraser before she managed to escape.

Fraser’s allegations reportedly led to a massacre of the native Butchulla people on the island, making the name ‘Fraser Island’ particularly offensive to many inhabitants today.

Though the decision to change Fraser Island’s name has received support from some Australians, Queensland MP and former state Attorney General Jarrod Bleijie took to Twitter on Sunday to protest the move.

“Have been going on holidays to Fraser Island all my life and will continue to go to FRASER ISLAND for the rest of it, despite what woke [Queensland Premier Annastacia Palaszczuk] says,” Bleijie tweeted, receiving criticism from Aboriginal Australians.

One user told Bleijie that her family “have also been going to the island – for 60,000 years” and called on the MP to “educate” himself about the history of K’gari. 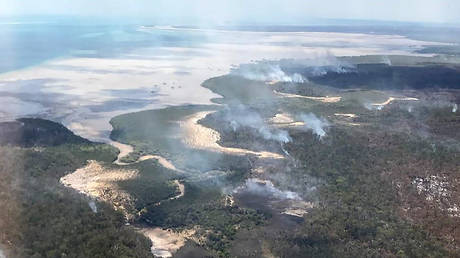