Accused of having “blood on his hands,” Australian Prime Minister Scott Morrison has retreated from threats to jail and fine returnees from Covid-ravaged India – describing the likelihood of stiff penalties as “pretty much zero.”

In a first-of-its-kind move, the country last week warned citizens who had been in India over the previous fortnight against trying to return home until May 15. Under emergency biosecurity restrictions, which came into force on Monday, offenders face up to five years in jail and a AU$66,000 (US$51,122) fine.

After public outcry and accusations of “racism,” Morrison said on Tuesday that the rules would be used “responsibly and proportionately” and that it was “highly unlikely” returnees would incur the penalties.

“These powers at their most extreme end have not been used for those sorts of sanctions in the entire time we’ve had these biosecurity regulations in place,” Morrison told the Channel Nine network.

He added that enforcement agencies had an “understanding” that the rules would be administered “in perspective,” but they had to be instituted to ease the pressure on quarantine systems and “prevent a third wave” of infections. Australia reportedly saw a 1,500% spike in Covid cases from India since March.

The Australian Medical Association on Tuesday called on the government to reverse the “mean-spirited” rules and have a plan in place to ensure the safe return of vulnerable citizens from India once the restrictions on inbound flights are lifted.

Earlier, the Australian Human Rights Commission expressed “serious concerns” over the move. Some of Morrison’s own party members and allies have also slammed the ban, including conservative political commentator Andrew Bolt, who said it “stinks of racism.”

Noting that criticism had been “exaggerated,” Morrison claimed similar measures had been in force under the Biosecurity Act (2015) for more than a year – to protect remote indigenous communities. He also said that the government was criticized, then vindicated, when it closed borders to China previously.

But opposition leader Anthony Albanese said there were marked differences between this ban and the government’s response to the outbreak in Wuhan, particularly on the issue of chartered flights to bring Australians home.

Noting that Australian citizenship “must mean something,” Albanese accused Morrison of making a “macho announcement” and then backing down.

An estimated 9,000 Australians are believed to be in India, including some of the country’s cricket stars, who are playing in the ongoing lucrative Indian Premier League (IPL) tournament.

Former Australian cricketer Michael Slater, who was commentating for the IPL, had tweeted, “If our Government cared for the safety of Aussies they would allow us to get home. It’s a disgrace!! Blood on your hands PM.”

If our Government cared for the safety of Aussies they would allow us to get home. It’s a disgrace!! Blood on your hands PM. How dare you treat us like this. How about you sort out quarantine system. I had government permission to work on the IPL but I now have government neglect

If our Government cared for the safety of Aussies they would allow us to get home. It’s a disgrace!! Blood on your hands PM. How dare you treat us like this. How about you sort out quarantine system. I had government permission to work on the IPL but I now have government neglect

Morrison later told reporters the restrictions would be “constantly reviewed” and expressed hope about a resumption in repatriation flights from India after May 15, following consultation with public health authorities. By that time, the government is planning to have more than doubled the capacity of a quarantine facility in the country’s Northern Territory.

But state bodies have been urging the government to designate additional quarantine centres so as to allow more repatriations. Under the country’s blanket ban on travel, 5,800 Australians are allowed in each week from overseas on exemptions. They must isolate for two weeks in hotels at their own expense. 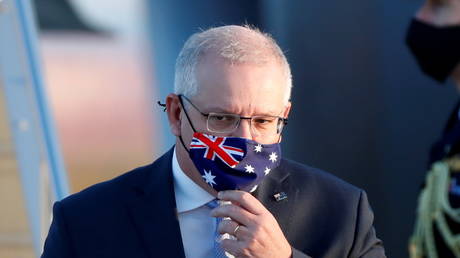 As Americans think about booking a...