Australia is deploying defense personnel to Port Hedland on its northwest coast to help contain a coronavirus outbreak on a bulk carrier, where 17 of the 21 crew members have tested positive.

Up to 10 Australian Defense Force (ADF) personnel are expected to be deployed to Port Hedland after the Western Australia (WA) state government requested for assistance, an ADF spokesman said.

“We are well prepared to manage the situation in Port Hedland, and every possible measure is being put in place to protect the local community,” WA Premier Mark McGowan said on Tuesday.

Seventeen crew members have tested positive for the virus, ship owner Oldendorff Carriers said, and 10 members have been moved to a quarantine facility, while seven remain on board. “Those in hotel quarantine are being kept away from the public and under strict supervision,” McGowan said. All crew members are in good spirits, according to health officials.

The crew was last changed in Manila on September 5. The ship owner said that the process complied with all protocols, and all crew members tested negative for the virus before leaving the Philippines.

The ship was scheduled to collect manganese ore for use in steel production. It is now anchored off Port Hedland, which is one of the world’s largest iron ore loading ports and is used by some of Australia’s top iron ore miners. The port’s operations have not been impacted by the incident.

Australia has barred cruise ships since the outbreak of pandemic in March, but allowed export carriers to continue operating.

The region has had no local virus cases for nearly six months. Australian Medical Association WA president Andrew Miller warned, however, that the state’s health services could not cope with a bigger outbreak. The Covid-19 hotspot state of Victoria on Tuesday reported 10 new infections in the past 24 hours. 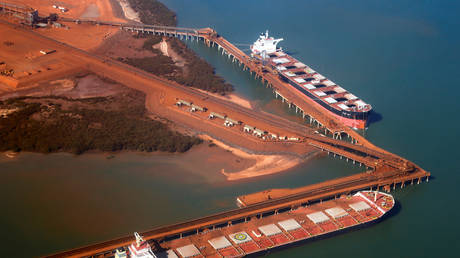 Covering up ’their own failed effo...