An Australian court has sentenced a far-right man, who hatched “rather amateurish” plans to attack Melbourne anarchists and Muslims, to a lengthy jail term. The judge said he was being punished for contemplating violence.

Phillip Galea, 36, is to spend almost five more years in solitary confinement before he can petition for parole. Last year a jury found him guilty of plotting terrorist attacks and inciting others to commit violent acts by writing a manual he called the ‘Patriot’s Cookbook’.

Right-wing extremism is a serious & growing terrorist threat. Thank you to all the security agencies involved in stopping this attack. https://t.co/aQBYfHVE0g

Justice Elizabeth Hollingworth on Friday acknowledged that Galea’s plot was “rather amateurish” and highly unlikely to succeed. But she said it was “illogical and implausible” that he was preparing “fake” attacks to expose a police informant inside right-wing groups to which he belonged, which was his line of defense during the trial. She said he didn’t show any remorse and continued advocating violence while in custody.

“Although you regard yourself as a patriot who holds mainstream views, it’s clear the jury found otherwise,” the judge said.

Hollingworth also noted that it was “somewhat ironic” that Galea’s work heavily plagiarized ‘The Anarchist’s Cookbook’, a notorious 1971 revolutionary manual, considering who he was targeting with his plot. Galea wanted to attack the Melbourne Anarchist Club as well as the Victorian Trades Hall to “eliminate leaders of the left.” He continued working on the document while awaiting trial in jail, but during the proceedings he claimed that it was meant to be a Monty Python-esque satire.

Galea is a forklift operator by trade and was a member of right-wing groups Reclaim Australia and the True Blue Crew. He was reported by his own mates in August 2016. During the trial witnesses said he talked about “mass extermination of the left,” whom he accused of promoting “Islamization of Australia,” and expressed a desire to “create a Muslim-free country.”

Investigators discovered that he had researched bomb-making, firearms and ballistic armor and had 362.1 grams of mercury in his possession – presumably to be used for poisoning his targets. Galea claimed he procured the toxic metal for a science project.

The man himself believes he was a victim of a far-reaching conspiracy involving his own lawyers. After he was sentenced he held up a sign which read: “I did not receive a fair trial.”

When he was free, the terrorism-plotter didn’t appear to have any close relationships, had issues with alcohol abuse as well as multiple drug-induced psychotic episodes, the court was told. After his arrest he remained in “effective” solitary confinement, which will be added to his years served. 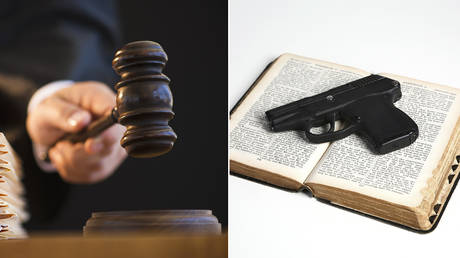 #VictoryPages: RT wins most at Sho...