Technophiles the world over are waiting expectantly for the start of this year’s Apple Worldwide Developers Conference. Here are the key big reveals the tech giant is likely to announce during its first online-only WWDC.

Each year, the company reveals its new operating system at its developer conference to provide developers the time to adopt and adapt to new features in order to optimize them in time for their autumn release, so this year’s flagship announcement will be iOS 14.

According to 9to5Mac, which had access to an early iOS14 build, the main differences we can expect come in the form of a more customizable home screen. Whilst this may sound lackluster for the biggest announcement of the conference, the new options include a ‘list view’ option to allow users organize and flick through all of their installed apps at once. Since it has now been 13 years since the launch of the first iPhone, it makes sense that a more nuanced way of filing and sorting through apps will solve a problem for many users.

The second change on that front comes in the form of home screen widgets. It’s still unconfirmed whether they will find their way into the final version of the iOS, but these widgets would fill the screen and be moved in a similar way to app icons today.

The next big iOS announcement is likely to be what has been internally described as ‘Gobi’ – Apple’s new augmented reality application – reportedly being tested in its stores and some Starbucks outlets already, which will allow users to scan Apple-branded QR codes.

In May, former TechCrunch reporter Josh Constine leaked several new QR designs that suggested the codes could be used to open certain Mac Pro and Apple Watch websites, as well as movies in the iTunes store. Another QR code suggested that they could be used to sign up to a Starbucks card, signaling possible future business use cases.

Earlier this month, Snapchat owner Snap stated that it believed “very strongly in the idea that computing overlaid on to the world, and augmented reality (AR) and the camera in particular, will be the foundation for the next major shift in technology.” With the imminent release of Gobi, it looks as if Snap has been proven correct.

One surprising detail expected to be announced later today is that Apple is considering the ability to set third-party apps such as web browsers and email applications as natives on Apple devices. Notoriously isolationist in how Apple products interact with competitors (Apple recently rejected Facebook’s new Gaming app from appearing in its App Store for the fifth time) this could signal a key shift in how the company operates.

Finally, a major feature of the new iOS is expected to be CarKey, a feature that allows users to unlock and control their cars via their iPhone or Apple Watch. This is a major indication of the direction that automation in general is heading. However, as with all tech-centric solutions, such advances create new risks. In this year’s Consumer Electronics Show (CES), one cybersecurity expert warned that the more digitally-reliant cars become, the more susceptible they’re likely to be to hacking – even while driven. Speaking at the event, Moshe Shlisel , CEO of Israeli cybersecurity firm GuardKnox, ominously described such future scenarios as potential “September 11 on wheels.”

Watch out for the kids

Reminding us of Apple’s ever-increasing roster of products, this year’s WWDC will surely bring a medley of new features to its Apple Watch series. The company recently touted a new ‘Kids’ mode, making it easier for parents to manage how much time is spent by their children on Apple Watches – and how.

A sleep mode is also likely to be unveiled that will monitor users’ sleep by measuring different sensors and metrics, including heart rate, noises, and movement. Furthermore, as the Apple Watch continues to be Apple’s health-centric device, the tech giant is reportedly developing a feature for detecting blood oxygen levels that will alert you once it reaches a certain low-point.

Meanwhile, tvOS 14 which powers both the Apple TV and Homepod is also expected to be adding a Kids mode, as well as a feature that will allow users to track how much time they spend watching content.

Following Apple’s iPad shift from iOS last year to iPadOS 13, the iPad soon gained trackpad and mouse input capabilities. With the announcement of the iPadOS 14, expect the iPad to become even more productive for users.

Out of several expected new features, perhaps the most exciting development for this piece of hardware is the rumored full Apple Pencil support on websites. This would mean that the Apple Pencil — much ridiculed when first announced, but since beloved by designers and artists — will now gain a plethora of new abilities such as drawing in Safari and other browsers.

A redesigned iMac is likely to be announced today – the first of its kind since 2012. Interestingly, this rumor is compounded by the low-supply in the current 27-inch iMac range, suggesting that another is on the horizon.

Last but certainly not least, Intel’s swan song is expected to finally play out, with WWDC rumored to be the arena in which Apple officially confirms the end of its 15-year partnership with its processor provider. Some analysts have predicted the move to ARM processors will offer performance improvements of 50-100 percent, and are expected to ship inside the next-generation 13.3-inch MacBook Pro and a newly redesigned iMac.

The new Mac operating system, still to be named but almost certainly Californian in nature, doesn’t seem to be bringing anything particularly new to the table this time around, apart from migrating the iOS’s Messages app onto the desktop. 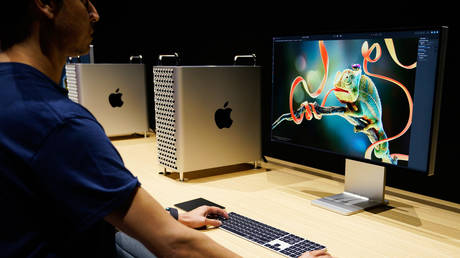 Seoul says military option on the...