A major fire broke out at a boat factory in the southern Iranian port city of Bushehr on Wednesday. At least seven ships have been damaged by the blaze, according to local media reports.

Footage circulating online shows firefighters battling the blaze on the pier, while some of the damaged ships emit thick black smoke.

Breaking: Iran says at least seven ships have been burnt after a large fire at the Bushehr port in southern Iran. The cause of the fire is unknown. pic.twitter.com/bamYDG9iNG

The vessels appear to be small civilian fishing boats, another video suggests. The fire produced a large smoke column visible from other parts of the city.

Appears a bunch of ships are on fire near Bushehr #Iran #Bushehr .. pic.twitter.com/iXzMwH86k5

A huge fire broke out in bushehr port in #iran right now, 3 ships are destroyed by the fire.
Causes still unknown pic.twitter.com/ifNd0LnOHX

According to preliminary data, no one was injured during the incident, yet the vessels appear to have sustained severe damage.

Iran has seen a string of mysterious incidents lately, which have occurred at various strategically important facilities, including military, nuclear and industrial sites across the country since late June. Arguably the most sensitive incident happened at the Natanz uranium-enrichment site in early July.

One of the facility’s buildings was badly damaged in an unspecified incident, with imagery released by Iran’s nuclear energy agency suggesting that a blast and fire might have occurred at the building. Tehran said it has already determined the cause of the Natanz mishap, but did not shed any more light on the incident. 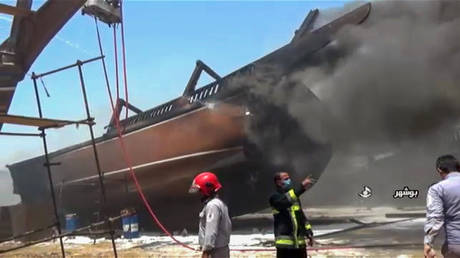