Twenty-four people were shot dead after a group of gunmen stormed a drug rehab center in Central Mexico and opened fire on patients and employees, the second deadly attack on the facility since last month.

The alleged mass shooting in the city of Irapuato on Wednesday was first reported in local media and later confirmed by Pedro Zavala, Secretary of Municipal Citizen Security, who said the armed assailants entered the rehab clinic and started shooting, wounding seven in addition to the 24 killed. Graphic images have emerged on social media purporting to show the aftermath of the attack.

A heavy police presence was reported in the area following the incident, backed up by National Guard troops and other federal agencies. Those injured were taken by ambulance to a nearby hospital for treatment.

Located in the industrial center of Guanajuato state, the same drug clinic fell victim to a similar deadly assault last month, which saw 10 people killed. While it remains unclear who was behind the attacks, or whether the two incidents are  related, local reporting noted that cartels known for extortion, kidnapping and murder are active in the area.

Guanajuato currently leads the country in homicides, registering over 1,500 this year alone, and has seen a recent uptick in cartel violence. Late last month, street battles erupted between the Santa Rosa de Lima cartel – a group specializing in drug trafficking, extortion and fuel theft – and Mexican security forces after the gang torched more than 20 cars and six businesses in the city of Celaya. The same cartel has also feuded with a rival group from Jalisco, with whom they have fought for control of the state.

In 2019, Mexico as a whole recorded nearly 35,000 homicides amid a surge in cartel activities, its highest annual count since 1997, when the government began collecting data on murders. So far in 2020, some 11,500 murders have been counted nationwide, according to federal officials. 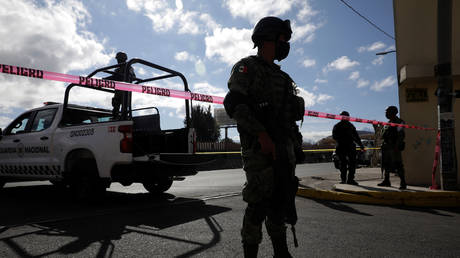 NATO can only respond with har...