At least 21 killed, 15 injured as bus filled with school children veers off road, crashes into reservoir in China (VIDEO)

At least 21 killed, 15 injured as bus filled with school children veers off road, crashes into reservoir in China (VIDEO)

At least 21 people have died and 15 have been left seriously injured after a bus carrying high school students veered off a road, broke through a guardrail and sank into a reservoir in southwest China.

The horrific incident happened at approximately noon local time in Anshun, in southwest China’s Guizhou Province. The exact number of passengers on board, believed to be mostly high school students sitting their college entrance exams, is not yet confirmed.

The cause of the accident was not immediately clear but CCTV footage of the incident shows the bus in which the students were travelling veering violently across multiple lanes of traffic.

The Emergency Management Department of Guizhou Province said some 141 firefighters including 19 divers were dispatched to the scene. So far, 15 people have been taken from the Hongshan Reservoir and taken to a nearby hospital for emergency treatment.

China’s national university entrance examination known as the ‘gaokao’ was originally scheduled for June but postponed because of the coronavirus outbreak. 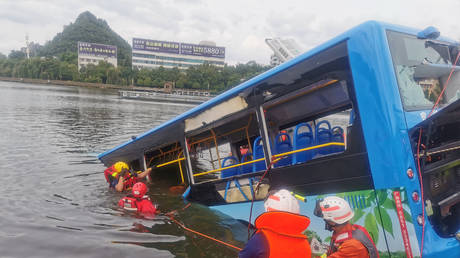 Stargazers can spot VENUS at ‘peak...