A tanker truck transporting liquefied natural gas lost control, overturned and exploded on a Mexican highway, killing at least 13 people in nearby vehicles.

Horrifying footage uploaded to social media captures the exact moment the tragedy occurred, as the truck crashed and exploded along the highway between the Nayarit state capital Tepic and Guadalajara in neighboring Jalisco state.

Authorities discovered the remains of 12 victims in three separate vehicles as well as an additional body on the tarmac, believed to be that of the truck driver.

A preliminary investigation found that the truck had lost control, overturned and exploded outside the town of Jala near the Jalisco-Nayarit border at approximately 08:30 local time.

None of the bodies were immediately identifiable as they had been completely calcified, such was the ferocity of the fireball from the explosion. The remains of the deceased have all been taken for forensic and DNA analysis to help identify those lost in the tragedy.

“The explosion reached an area of around two hectares, in which four vehicles … were completely destroyed: a tanker truck, two cars and a truck,” a statement from the Nayarit Attorney General’s Office said.

A 31-year-old woman was rushed to a local hospital for emergency treatment after she suffered severe burns in the explosion. 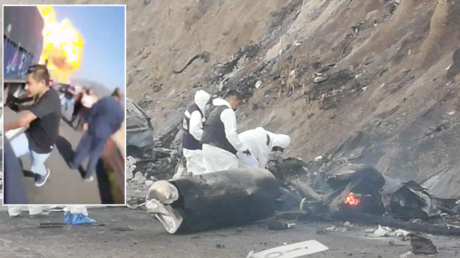