Astronomers in Australia have discovered four unexplained circular objects, each with an unusual glow, that defies current understanding and may represent a new type of phenomenon hitherto unseen by humanity.

He happened upon the unexplained phenomena while mapping the night sky as part of the Evolutionary Map of the Universe (EMU) project.

“The ORCs represent a new type of object found in radioastronomy images,” Norris says in a yet to be peer-reviewed paper.

The professor theorized that they represent a “spherical shock wave” from an “transient event” in another galaxy. Another possible answer is that they are a new category of a known phenomenon seen from a fresh angle. “Such as the jets of a radio galaxy or blazar when seen end-on, down the ‘barrel’ of the jet,” Norris explained.

Three of the four were spotted in 2019 while the remaining one was discovered in data from 2013 collected by the Giant Metrewave Radio Telescope in India.

They are all ‘high up’ in the sky relative to the galactic plane of the Milky Way and are roughly one arcminute in diameter. For reference, as observed from the Earth, the sun and moon both have angular diameters of about 30 arcminutes, however, given that we don’t yet know how far away these ORCs are, we can’t put their arcminute references into perspective.

All four are completely invisible in X-ray, optical, or infrared wavelengths, which may narrow down their origin and composition as they are only visible in radio wavelengths.

Winnowing down the possibilities even further is the fact that the signatures of the ORCs do not match those of planetary nebulae that we have studied nor do they fit the profile of supernova remnants either, leading to prolific head scratching among the astrophysics and astronomy communities.

Whatever is causing the ORCs likely comes from outside the Milky Way and may potentially be the spherical shockwave of a truly massive event at some point in the distant intergalactic past.

Norris and his team have also identified six fainter candidate ORCs to explore in more detail which may soon put to bed the mystery of these distant, glowing discs. 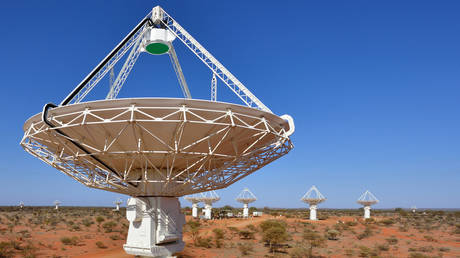