Through constant vigilance and some good fortune, astronomers have managed to capture the moment a supermassive black hole in a galaxy 215 million light-years away tore a star apart.

The so-called ‘tidal disruption event’ (TDE) is the closest such death of a star humanity has ever witnessed.

Astronomers were alerted by the intense flash of light, visible hundreds of millions of light years away, just before parts of the star disappeared into the black hole’s event horizon after being ‘spaghettified’ by the immense gravity.

The TDE, named AT2019qiz, was spotted in September 2019 and observed by astronomer Matt Nicholl of the University of Birmingham and his team over the course of the next six months.

Such stellar TDEs are almost impossible to predict and are only ever witnessed through constant surveillance of the sky, combined with a bit of good fortune. When the massive flare erupted during this particular TDE, astronomers responded incredibly quickly, pointing a vast array of telescopes at the constellation of Eridanus where it occurred.

“We immediately pointed a suite of ground-based and space telescopes in that direction to see how the light was produced,” said astronomer Thomas Wevers, who was based at the University of Cambridge during the research.

Given that TDEs mostly glow in optical and ultraviolet, it was incredibly fortunate that all of these resources could be amassed and directed so quickly to capture such a rare event.

The flare itself is the result of almost unfathomable gravitational and frictional forces within the strands of cosmic spaghetti, which is made up of material from the soon-to-be-extinct star. The process is so intense, in fact, that at certain points, the TDE event outshines its host galaxy for a time before slowly fading over time until there’s nothing left.

Based on their observations, the researchers determined the star was at one point roughly the same mass as our own Sun, and lost half of its mass to the black hole which is approximately a million times more massive.

Observations of the TDE finally provided direct evidence for the outflowing of gas during these events, which had long been theorized and debated but never observed. In fact, researchers now know that, at least in this case, the black hole launched powerful jets of dust outward at velocities up to 10,000 km/s as it was eating the star.

This explains past optical and radio emissions detected by astronomers studying black holes over the years that were left somewhat under explained and little understood.

“This event is teaching us about the detailed physical processes of accretion and mass ejection from supermassive black holes,” said astronomer Edo Berger of the Harvard-Smithsonian Center for Astrophysics. The researchers themselves described AT2019qiz as a “Rosetta stone for interpreting future TDE observations” ahead of much anticipated observations from elsewhere in the scientific and astronomical community. 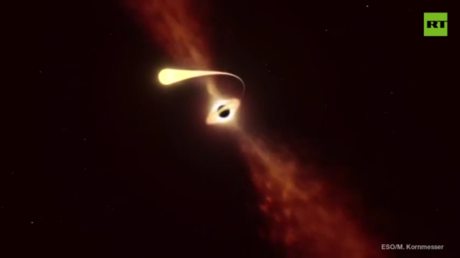