As a battered and beleaguered planet approaches the finish line of 2020, the universe appears to be playing a dark joke on humanity by sending five asteroids in two days, with a 2,700ft space rock to follow just days later.

The behemoth dubbed 2000 WO107, estimated to measure up to 0.51km in diameter, or roughly the height of Dubai’s Burj Khalifa, the tallest building in the world, will be paying Earth a visit (cosmically speaking) at 10.09am GMT (5.09am ET) on Sunday, November 29.

The visitor won’t be sticking around for long as, despite its enormous size, it is traveling at a whopping 25.07km per second – or roughly the equivalent of 90,000kph. For reference, the average bullet travels at around 4,500kph. It also won’t be visible to most Earthlings as it is set for what NASA deems a “close flyby” at a paltry 0.02876 Astronomical Units (AU) from Earth – or 2,673,409 miles.

NASA defines a Near Earth Object (NEO) as any asteroid or comet coming within 1.3 AU of Earth.

In the meantime, there will be plenty of activity in our cosmic backyard, with five asteroids due in the area on Monday and Tuesday alone.

The average distance between Earth and the Moon is about 385,000km but NASA considers all objects within a 7.5 million-kilometer range (or 19.5 times the distance to the Moon) to be worthy of monitoring, just in case any succumb to a sudden course correction.

NASA and other space agencies around the globe keep a watchful eye 24/7 but there’s a lot of sky to cover, so sometimes humanity misses these close flybys, as was the case with a new record-holding close flyby which took place this month. 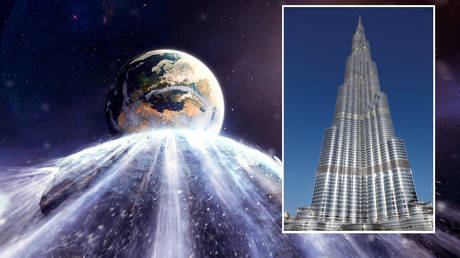