Green Party leader Eamon Ryan provoked chuckles in the Irish parliament and a swirl of controversy outside the chamber when he had to be woken up to cast a vote after dozing off during a motion on workers’ rights.

Amusing footage from the Dail shows Ryan’s name being called several times during the roll-call vote before he was eventually roused by Government Chief Whip Jack Chambers, who was sitting two rows in front. Once finally awake, Ryan voted against the motion, which aimed to bolster workers’ rights during the coronavirus pandemic.

It appears Minister Eamon Ryan may have consumed a whole bottle of dreamysleepynightysnoozeysnooze pic.twitter.com/hNejr2YXGP

The motion had been proposed by Social Democrat Gary Gannon, who described Ryan’s napping as “disappointing.” “There is a manner in which we carry ourselves in the Dail chamber and there is an expectation that at the very minimum, you should be awake,” he told Independent.ie.

The incident caps a rocky beginning for Ireland’s new coalition government, in which Ryan serves as minister for climate action, communications networks and transport. The government finally took office at the end of June after a seismic election in early February left Ireland’s traditional two big parties, Fianna Fail and Fine Gael, both far short of a majority, forcing them to come together and join with the Greens in order to attain power. 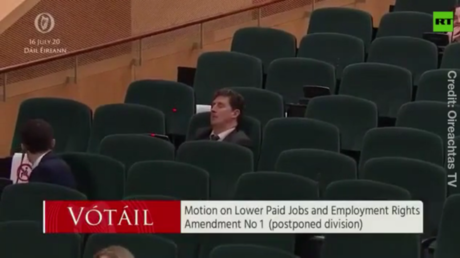