The Armenian military has claimed it downed an advanced Azerbaijani drone amid ongoing border clashes. The flare-up has already led to casualties on both sides, with the South Caucasus neighbors blaming each other for the spat.

“Armenian air defense units hit a drone of the Azerbaijani armed forces, which is used as a fire control system,” Armenia’s Defense Ministry spokeswoman Shushan Stepanyan said on Tuesday, sharing footage of the incident on Facebook.

The drone is said to be an Israeli-made Elbit Hermes 900, a medium-sized multirole UAV. Azerbaijan is believed to have as many as 15 such machines in its inventory.

The Azerbaijani military, for its part, denied losing a drone, and claimed that its own forces shot down an Armenian UAV and destroyed an artillery system. It shared videos of artillery strikes on Armenian positions, yet no proof for the UAV claim was provided.

The fierce clashes erupted over the weekend and continued into Tuesday morning. Azerbaijan’s Defense Ministry accused Armenia of violating a 1994 ceasefire dozens of times and of shelling Azerbaijani positions with mortars and grenade launchers.

Both sides have acknowledged casualties in the ongoing clashes, with Azerbaijan confirming a major-general and a colonel were killed in the skirmishes. Baku also said it lost several servicemen and a civilian in shelling along the northern part of the border. Armenia, for its part, confirmed four casualties among its officers on Tuesday.

Armenia and Azerbaijan fought a bloody border war in the early 1990s after Nagorno-Karabakh – an Armenian-populated enclave inside Azerbaijan – declared independence from Baku. The war ended with a ceasefire agreement, after which Nagorno-Karabakh became an unrecognized republic, closely allied with Armenia. 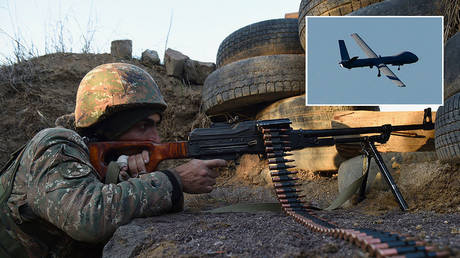 TikTok tips and tricks – how to ad...