Argentina has the misfortune of boasting the highest rate of positive Covid-19 tests in the world, even after the country endured more than 200 days of restrictions purportedly aimed at stopping the spread of the virus.

In the South American nation, six out of every 10 tests for the virus yield a positive result, according to the Oxford University-affiliated Our World In Data coronavirus tracker.

Argentina has registered a seven-day rolling average of 12,500 new daily cases, with the total number of infections reaching 809,728 on Monday. The country has seen 21,468 Covid-related deaths since the start of the pandemic.

Health professionals have blamed the soaring positive rate on a lack of testing and poor enforcement of restrictions.

As a comparison, New York state carries out 100,000 tests a day, four times the number conducted in Argentia despite having less than half of the South American nation’s population of 45 million. The positive rate in New York state is slightly above one percent. The Argentinian government has attributed the country’s high positive rate to its track and trace program which identifies people most likely to have the virus. However, it said that it would also seek to ramp up testing among the general population.

Argentina imposed a strict lockdown at the end of March, but the containment strategy has not produced the desired results. Citizens have endured months of harsh restrictions that barred people from leaving their homes unless they were buying groceries or medicine. The country is still officially in lockdown until at least October 11, but in some areas, including the capital Buenos Aires, measures have been relaxed as the country attempts to restart its economy. 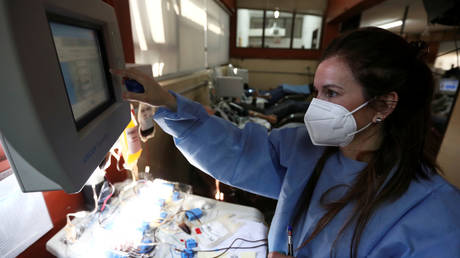