A study by researchers from the UK and US shows that the Earth’s magnetic field, which protects it from the Sun’s destructive solar flares, may change direction 10 times faster than previously thought.

The study shines light on the liquid iron flowing almost 2,000 miles below the Earth’s surface and how it influences the movement of the Earth’s geomagnetic field.

The magnetic field is crucial to life on Earth as not only does it help us with things such as navigational systems, but also protects us from radiation from outer space.

The work involved combining computer simulations of the field generation process with a recently published reconstruction of time variations in the Earth’s magnetic field spanning the last 100,000 years.

The work revealed a sharp change in the direction of the magnetic field around 39,0000 years ago. The shift, at 2.5 degrees per year, was much faster than previous estimates.

The shift was preceded by the global Laschamp excursion, a short reversal of the Earth’s magnetic field roughly 41,000 years ago.

There have been many times in history when the Earth’s magnetic poles have reversed, and we know this because of the magnetic makeup of certain ancient rocks which show metals with different polarizations.

In general, we don’t know much about the effects of such a flip, except that once it is completed, the needle on a compass will tell us that north is south and that south is north.

This is important as such rapid changes are associated with a local weakening of the magnetic field, meaning that the Earth is more vulnerable to radioactive elements from space during these times and locations.

Most generally, however, over the past century, the Earth’s magnetic field has seen a 10 percent reduction in strength, with particular weakness being spotted over the Atlantic Ocean between Africa and South America.

Known as the South Atlantic Anomaly, the area has proven to be a hotspot for technical difficulties for satellites orbiting the Earth, with some scientists proposing that the weakness is a sign of an impending geomagnetic reversal.

In any case, understanding the Earth’s magnetic field over geological time is incredibly complex.

As Dr. Chris Davies, associate professor at Leeds, says: “We have very incomplete knowledge of our magnetic field prior to 400 years ago. Since these rapid changes represent some of the more extreme behavior of the liquid core they could give important information about the behavior of Earth’s deep interior.” 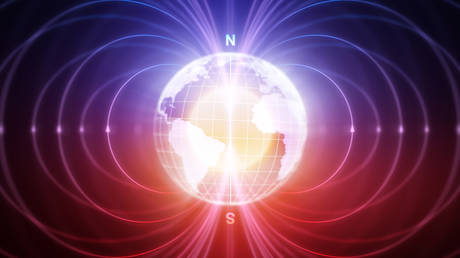