Apex of culture war: Marxism is trending on Twitter, because of…a left vs right fashion row?

Apex of culture war: Marxism is trending on Twitter, because of…a left vs right fashion row?

Some British Twitter users were puzzled after seeing “Marxism” trending, just because a boy-band singer put on a dress for a Vogue cover, and a conservative pundit viewed it as part of a radical-left cultural conspiracy in action.

The December issue of the fashion magazine features One Direction’s Harry Styles, the first male to ever get a solo cover in Vogue. Styles “makes his own rules” the cover stated, backing the blurb with a photo of the star wearing a dress. More photos of gender-bending clothing choices came inside and were used to promote the story on social media.

One of the negative reactions to the provocative photo-op came from conservative commenter Candace Owens, who declared that Western society desperately needed manly men. “The steady feminization of our men at the same time that Marxism is being taught to our children is not a coincidence. It is an outright attack,” she tweeted.

There is no society that can survive without strong men. The East knows this. In the west, the steady feminization of our men at the same time that Marxism is being taught to our children is not a coincidence.
It is an outright attack.

And this is how the classical teaching of class struggle, which has little to do with gender-appropriate garments, climbed to the top of Twitter, puzzling some commenters…

Ok, Marxism is trending due to a man wearing a dress. I mean, if that’s all it takes, dress up for the revolution, my dudes https://t.co/OPpe1DlIKR

…and amusing quite a few others.

Marxism trending in the UK pic.twitter.com/CGvoUhS3Ic

Signs of impending Marxism is a pop star wearing a dress for a high brow fashion shoot. pic.twitter.com/RECnRFIlB6

I see Marxism is trending again probably due to Sun readers objecting to it.
I would like to ask them just one thing , “Have you seen any of their films ? “ They’re pure dead brilliant . pic.twitter.com/lTpd2b5zhB

Owens is far from being the only person to take issue with Styles’ attire, of course. Likewise, there is no shortage of people defending his non-masculine outfits – either on principle or by arguing that there is nothing feminine about dresses at all.

to everyone who’s upset about this, just letting you know your sky daddy also rocked a dress too 😊 pic.twitter.com/HhCJ7bneyo

Incidentally, last week a celebrity from the other side of the cultural war fronts had posted a much-mocked take on what people should and should not wear, based on their gender. Feminist commenter Anita Sarkeesian lashed out at the TV series ‘The Mandalorian’ for showing a female character in chest armor, which, unlike for a male counterpart, has a bulge better fitting a woman’s anatomy.

Accurate to the original source material, original voice actress playing the role in Live Action, & Katee Sachhoff talked about menstruation & tampon usage in her YouTube channel recently for her “How I Train My Body for Film & Television” video because guess what is a woman. pic.twitter.com/uUeqUxUepP 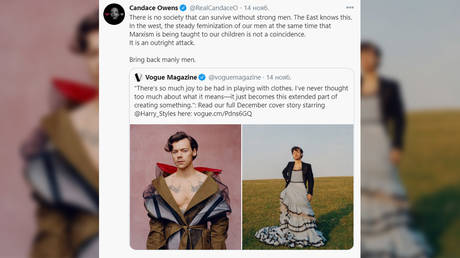