The Associated Press has tweaked its popular style guide to suggest that ‘black’ and several other ethnic terms be capitalized. ‘White’, however, did not make the cut, at least immediately, prompting cries of hypocrisy.

The AP’s vice president of standards, John Daniszewski, announced the style change in a blog post on Friday, arguing it was in line with “long-standing capitalization of other racial and ethnic identifiers such as Latino, Asian American and Native American.”

“AP’s style is now to capitalize Black in a racial, ethnic or cultural sense, conveying an essential and shared sense of history, identity and community among people who identify as Black, including those in the African diaspora and within Africa,” Daniszewski wrote, adding “The lowercase black is a color, not a person.”

The updated style guide will also recommend that ‘indigenous’ be capitalized when referring to the “original inhabitants of a place.”

AP has changed its writing style guide to capitalize the “b” in the term Black when referring to people in a racial, ethnic or cultural context, weighing in on a hotly debated issue. https://t.co/yeigYh9GWU

While the AP noted that it was still deliberating on whether to similarly capitalize ‘white,’ saying the decision would be made in the coming weeks, Friday’s announcement – which coincided with the Juneteenth holiday – has already drawn backlash online. Critics said that by claiming it was deliberating to capitalize ‘white,’ the AP simply sought to simply escape. Some suggested it had already decided not to do so, but does not want to spark accusations of bias – at least while the issue of racial justice is the talk of the town.

If you don’t do this with “White” too then you are hacks.

I fully expect you to be hacks.

What about White? And Brown?

It’s hilarious AP claims they are now deliberating whether or not to capitalize the “w” in white. They aren’t deliberating it. They already know they won’t be capitalizing it. How stupid do they think we are?

Others argued the rule change was a “shallow gesture” that accomplished little for equality or racial justice, with some critics comparing the move to a series of corporate mascots recently pulled from products after being deemed offensive, which many have also slammed as a cheap exercise in pandering.

Every time a shallow gesture like this is made I’m going to capitalize the “v” in Vomit when referring to what I just did in my own mouth.

Shooting back at the detractors, some netizens defended the new style recommendation, pointing out that ‘Caucasian’ is already capitalized in the AP guide, insisting no double standard was at work. Another user argued that, at least in the American context, slavery had erased the national identities of Africans, creating a unique “Black culture” that transcends skin color alone.

There is no such thing as “white” culture or ethnicity. Polish, Italian, German, Eastern European, Irish, etc all valid… All white ever did was signify “not the other” in America. Black culture was born out of the unique situation of having our history erased being brought here

white is Caucasian in AP style and it’s already capitalized. Y’all are so damn fragile. 🙄

Perhaps exhausted with the overwrought focus on race in the media, some commenters proposed some style changes of their own, joking that writing in all-caps might present a solution tolerable to all sides.

The AP rule change follows the lead of the Columbia Journalism Review, which similarly revamped its style sheet earlier this week to capitalize the ‘B’ in ‘black.’ Like the AP’s decision, the Review was lambasted for what critics deemed hypocrisy – some even going as far as to label the decision itself as “racist.” 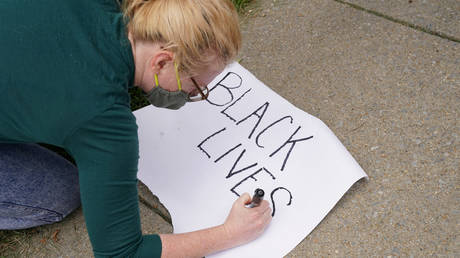 Duterte Harry: Philippines leader admits ‘faults’ including ‘extrajudicial killings,’ but says corruption isn’t one of them