A Russian armored vehicle has come under fire while patrolling a strategic highway in Idlib province along with allied Turkish forces, prompting commanders to cease the joint operation.

The patrol, jointly manned by Russian and Turkish soldiers, was targeted by militants that struck an infantry vehicle with an anti-tank rocket. The apparent ambush happened as the convoy traveled along the M4 highway which runs between Aleppo and Latakia on the Mediterranean coast.

No one died in the attack, but two members of Russia’s military police sustained what Russia’s Reconciliation Center in Syria called “light concussion.”

The Russian and Turkish forces along with Syrian security services are investigating if militants still holding ground in Idlib were behind the attack.

Moscow and Ankara launched joint patrols back in March after they agreed a ceasefire in the Idlib area, where the last remaining pockets of militant resistance are still present. The agreement saw Russian and Turkish forces establish a safe corridor on either side of the M4 highway.

Last week, a Russian military convoy was hit by what appeared to be a roadside bomb in Deir-ez-Zor province. Three service members were injured, one of them – a Major General was severely wounded and later died of his injuries, the Defense Ministry confirmed. 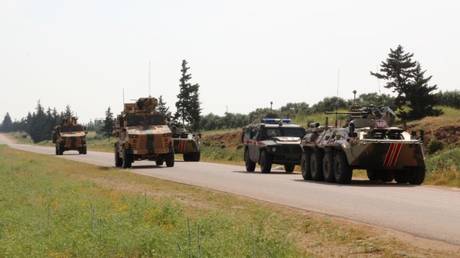