Another Pr**k in the Wall? Roger Waters chews out Mark Zuckerberg for wanting to use Pink Floyd protest song in Instagram ad film

Another Pr**k in the Wall? Roger Waters chews out Mark Zuckerberg for wanting to use Pink Floyd protest song in Instagram ad film

Denouncing Facebook’s “insidious” operating practices, iconic Pink Floyd rocker Roger Waters did not mince words in rejecting the social media giant’s request to use his song ‘Another Brick in the Wall (Part 2)’ in an ad campaign.

At a public forum event in support of imprisoned WikiLeaks founder Julian Assange in New York last week, Waters held up a sheet of paper and claimed that Facebook CEO Mark Zuckerberg offered him “a huge amount of money” for permission to use his classic 1979 protest ballad against conformity.

“So it’s a missive from Mark Zuckerberg to me… with an offer of a huge, huge amount of money and the answer is, ‘f**k you! No f**king way!’,” Waters said, drawing applause from the crowd.

The mail attributed to Zuckerberg apparently said the song would be used “in the making for a film to promote Instagram.”

The 77-year-old rock legend said he only brought up the letter – which noted that the “timeless” song’s “core sentiment” was still “prevalent and necessary today” – since it was a demonstration of the tech giant’s “insidious movement… to take over absolutely everything.”

“So those of us who do have any power, and I do have a little bit – in terms of control of the publishing of my songs, I do anyway. So I will not be a party to this bull***t, Zuckerberg,” Waters said.

When sycophantic gatekeeping #EFFUXR s evolve a spine like in other industries #VR #XR #AR may be one. pic.twitter.com/kwLfr89UYk

Referring to the platform’s alleged censorship of material related to Assange, Waters said the song would be used to make “Facebook and Instagram even bigger and more powerful” in order to “continue to censor all of us in this room” and prevent Assange’s story from “getting out to the general public.”

Later, in response to a question about whether Facebook should be deleted, Waters said, “How did this little pr**k, who started off going, ‘She’s pretty, we’ll give her a four out of five. She’s ugly, we’ll give her a one’… How the f**k did he get any power in anything?”

“And yet here he is, one of the most powerful idiots in the world,” added Waters, who had joined Assange’s brother and father at the New York event, which kicked off a month-long US tour to raise awareness of the jailed activist’s predicament.

After video of the remarks was widely shared, Waters doubled down on his statements on Sunday and challenged “trolls” and “pr**ks” to “call me a hypocrite for posting this on Zuckerberg’s crappy censored platform @Facebook now.”

.@petercronau, thank you for paying attention brother. Calling all trolls, come on you pricks, call me a hypocrite for posting this on Zuckerberg’s crappy censored platform @Facebook now. https://t.co/3NYrW7Pw2i

Since April 2019, Assange has been incarcerated without bail in the UK’s high-security Belmarsh prison, after being forcibly removed from Ecuador’s London embassy to be extradited to the US.

In January, a London court blocked an extradition request due to concerns over the effect US prison conditions will have on Assange’s mental health.

On the day of his arrest, the US unsealed the Espionage Act indictment against Assange, which had been filed in secret by the Trump administration’s Justice Department in March 2018. Though Joe Biden now occupies the White House, little has changed.

In an interview with RT on Friday, Waters said Assange is “being held up as an example: Keep your mouth shut or this will happen to you. They are trying to kill Julian Assange because he spoke the truth, and it’s disgusting.”

If extradited and convicted, Assange could be handed a sentence amounting to 175 years behind bars.

“We know for sure that he committed no crime. All he did was report the news. If that’s a crime then we should lock up the editorial boards of the New York Times and everyone else… the whole thing is a complete sham,” Waters told RT. 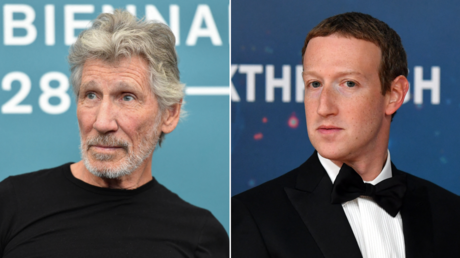