A blast at a power plant has occurred in Iran, this time in the central part of the Islamic Republic. No casualties have been reported from the incident, which follows a string of explosions and fires at key sites in Iran.

The incident occurred early Sunday morning at the Islamabad power plant, the CEO of the Isfahan Power Company told state news agency IRNA. He said one of its substations had blown off because of the wear and tear on a transformer, no one in the vicinity had been injured.

No disruptions to electricity supply were recorded, the official said, adding the substation returned to operation after about two hours.

“The damaged equipment is also being repaired and replaced,” he reported.

Built around 50 years ago, the Islamabad power plant is said to be the oldest in Iran’s central Isfahan province. It services mainly that city of about two million, which is home to numerous historic sites.

The Isfahan explosion is the latest in a growing series of incidents affecting Iran’s key industrial sites, energy facilities and infrastructure. Last Wednesday, several ships caught fire at a shipyard in the port city of Bushehr. On July 13, there were reports of a fire at an industrial zone near Mashhad.

Power stations across the nation have also suffered similar incidents in recent weeks. On July 4, a fire broke out at the Zargan plant, located in the city of Ahvaz. A fire department official told local media the blaze was caused by a transformer, which exploded due to overheating.

There was also a string of incidents at other key locations, the most high-profile of which was a fire at the Natanz nuclear enrichment facility. While Iranian officials said they had determined the cause of the fire, their tight-lipped remarks led to speculation that Israel or the US – Iran’s two arch-nemeses – may have sabotaged the facility.

Tehran warned that should the Natanz incident prove to be the result of a foul play, it won’t go unanswered. Foreign Ministry spokesperson Abbas Mousavi said last week that if the country’s special services determine that “foreign elements have been involved, they will announce it, and there will be consequences.” 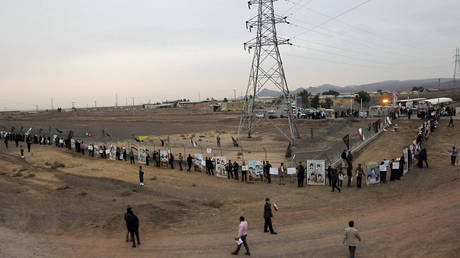