Renewed hydrocarbon exploration in disputed waters would be an “unwise” move by Turkey, a German government spokesman said as Ankara prepares to send its research vessel to conduct seismic studies yet again.

The spokesman for the federal government, Steffen Seibert, was quoted by German media as saying Ankara’s decision to renew seismic surveys in the disputed area would set back efforts to establish talks between Turkey, Greece and Cyprus, and “would certainly be anything but conducive to the further development of EU-Turkey relations.”

It would be an unwise move for Turkey to begin exploration in a disputed area again.

The Oruç Reis has been a considerable source of rising diplomatic tensions between Greece and Turkey in 2020. Ankara withdrew the vessel in mid-September, ahead of an EU summit on eastern Mediterranean issues.
Progress appeared to be near as Greek and Turkish foreign ministers met last Thursday on the sidelines of a security conference in Slovakia. It was the first time the ministers had met since the crisis began and both sides looked in good spirits as they agreed on future “exploratory talks.”

Reacting to the move on Monday, the Greek Foreign Ministry described the development as a “major escalation” and a “direct threat to peace in the region.” 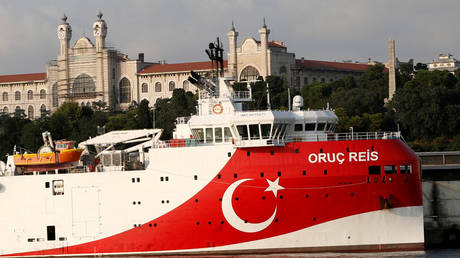