UFO hunters believe they finally have proof that Earth has been visited by alien crafts after a peculiar pattern was spotted hovering over a beach in New Zealand on Google Maps’ street view.

The supposed unidentified flying object appears to be suspended in the air over St Kilda beach on New Zealand’s South Island in the Google 360-degree image. The photo was uploaded by a user named David Newstead all the way back in 2014, but it shot to prominence this week after self-proclaimed alien-hunting expert Scott Waring posted a video about it on Friday.

“The UFO looks like a fat disc, thicker in the upper and lower middle. The object is metallic in color and has no wings and nothing to indicate that it might be a balloon, drone, plane or anything,” Waring breathlessly claimed on his ET Data Base blog.

The ufologist added that the object was in “extraordinary focus” and appeared to be warping the air around it “as if its propulsion system is altering the air temperature or static.”

Remarkably, Waring’s ardent followers proposed even more outlandish explanations for the unusual occurrence. Not buying that it could have a straightforward explanation, such as being an unusual drone, a camera glitch or even mischief-making by the uploader, some of the commenters believed it was potentially proof that humanity is living in a simulation.

Others speculated about how the UFO was powered and what was driving it, while one commenter hailed it as “phenomenal.” “I wonder how fast this thing was traveling – faster than the eye could catch or was it hovering and cloaked to the human eye? I just don’t know, but the mystery is exciting,” Waring added.

Waring has made a host of other “discoveries” in Google Maps and in a range of other sources, including NASA images. Despite his enthusiasm, experts say these UFO “sightings” can usually be explained by a trick of the mind known as pareidolia. This is the tendency for humans to see recognizable shapes or patterns where they do not exist. 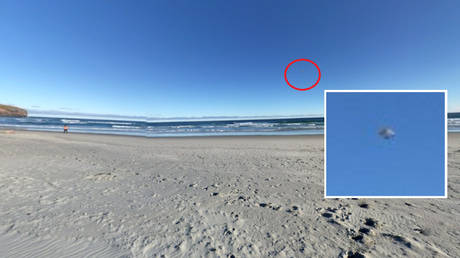