Close
Trending News
HomeWorldAir pollution could cut 9 years of life expectancy for 40% of Indians if something isn’t done, study warns

Air pollution could cut 9 years of life expectancy for 40% of Indians if something isn’t done, study warns

Air pollution could cut 9 years of life expectancy for 40% of Indians if something isn’t done, study warns

More than 480 million people in India could see their life expectancy reduced by more than nine years if record levels of air pollution aren’t reduced swiftly, a report by US researchers has revealed.

The people living in the Indo-Gangetic plains of northern India, who account for 40% of the country’s population, are faced with pollution levels that “regularly exceed those found anywhere else in the world by an order of magnitude,” the Energy Policy Institute at the University of Chicago (EPIC) said in its annual update, published on Wednesday.

The residents of this region, which includes the megacities of Delhi and Kolkata, are on track to lose more than 9 years of life expectancy if 2019 concentrations persist.

New Delhi had been named the world’s most polluted capital for the third year in a row in 2020, according to IQAir group, which measures air quality based on the concentration of PM2.5 lung-damaging airborne particles. And that’s despite the city’s 20 million residents enjoying the cleanest air on record last summer amid the Covid-19 lockdown.

EPIC, which has its experts working on the ground in India, said it was especially alarming that “levels of air pollution have expanded geographically over time” in the country. In such states as Maharashtra and Madhya Pradesh the average person is currently losing an additional 2.5 to 2.9 years of life expectancy compared to the early 2000s, it added.

In India as well as in neighboring Bangladesh, Pakistan and Nepal, which are also among the nations with the worst air quality in the world, the impact of air pollution on life expectancy is “substantially higher” than that of any other health threat, including smoking, alcohol and drugs, as well as unsafe water and sanitation.

“Fortunately, more and more people in these countries are recognizing the severity of the problem, and governments are beginning to respond,” the report said.

EPIC has praised the Indian authorities for declaring a “war on pollution” and launching the National Clean Air Program (NCAP) in 2019. The initiative set a deadline of 2024 to reduce pollution levels in 100 of the worst-affected cities by 20% to 30% through cuts in industrial emissions and vehicular exhaust, stricter rules for transport fuels and biomass burning, and better monitoring.

NCAP’s targets are non-binding, but if they’re achieved the average life span will increase by at least 1.7 years for the whole of India and by 3.1 years for residents in New Delhi, the report pointed out.But even in this case, the country would still lag behind the air quality guidelines of the World Health Organization.

If WHO’s standards are met, life expectancy in India, Bangladesh, Pakistan and Nepal will grow by 5.6 years, the report claims. 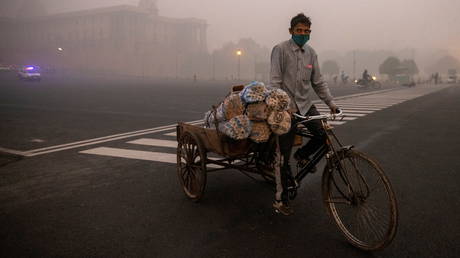