The Taliban has captured a district located less than an hour drive from Kabul. Government counter-offensive to retake it was launched just hours before three-day Eid al-Fitr ceasefire is expected to begin.

The Nerkh district fell into hands of the Taliban overnight, with a military base and police headquarters overrun by the militants. While, technically, the district lies in the province of Wardak, neighboring Kabul, it’s only some 40km (25 miles) away from the country’s capital.

Afghanistan’s authorities have acknowledged the fall of the district, describing its capture by the Taliban as a “tactical retreat” of the government forces.

On Wednesday, Afghani special forces were deployed to the district and an operation to retake it has begun. The government has only a few hours left to re-capture the area, as a three-day ceasefire is set to begin on Thursday midnight. The ceasefire was announced by the Taliban over the weekend to mark the end of the Muslim holy month of Ramadan and the Eir al-Fitr festivities.

“We will have to do it today because after the ceasefire, it will give the Taliban enough time to dig in and will complicate the operations and increase our casualties,” a senior government official told Reuters on condition of anonymity.

Afghanistan has seen an uptick in violence over the past few weeks following the announcement by the US President Joe Biden, who promised to withdraw the American troops from the country by September 11 following two decades of never-ending war. Taliban has criticized the deadline, urging Washington to stick to May 1 deadline, agreed under Donald Trump instead.

The ongoing turmoil includes both the intensified fighting between the Taliban and the government, as well as assorted terrorist attacks, happening in Afghanistan on almost daily basis. One of the deadliest incidents of the past weeks occurred back on Saturday, when a school in Kabul was targeted by multiple explosions. The attack killed at least 68 and injured over 160, with the majority of the victims being female students.

Kabul was quick to blame the Taliban for the blasts, yet the militant group denied any involvement, condemning the school attack and pointing fingers at Islamic State terrorist group. 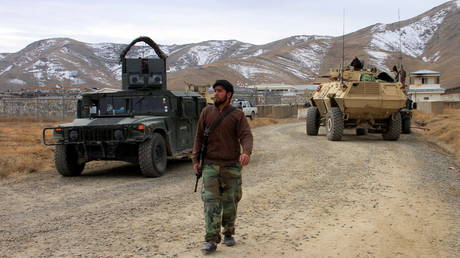