A member of Bavaria’s AfD faction tried to mock mandatory face protection rules, taking the floor with a gas mask on his face. The extravaganza saw him engaging in an uphill battle with parliament bosses.

Stefan Loew, a member of the right-wing Alternative for Germany (AfD) party, stole the limelight during Tuesday’s session of the Bavarian state parliament. Invited to take the floor by the speaker, he turned up at the podium wearing a heavy-duty gas mask.

The stunt garnered some chuckles from the audience, but those running the meeting refused to play along.

“Mr Loew, I’m now giving you three seconds more [to take the gas mask off],” a vice-speaker is heard saying in a livestream video. The stubborn MP hits back, his voice strangled: “There is indeed a requirement to wear a mask!”

The vice-speaker repeatedly demanded that Loew stop “making fun” of the session, but the AfD lawmaker kept speaking anyway – albeit quite inaudibly.

Several minutes into the altercation, Loew was deprived of the chance to speak. The ostracized MP left the podium and finally took the gas mask off as he returned to his seat.

The Bavarian parliament itself has obliged all lawmakers and administrative staff to wear protective masks at plenary meetings – a requirement which the AfD says infringes on MPs’ rights and liberties. The opposition party members refused to abide by the order.

Face masks became mandatory across German states earlier in April, as the nation struggled with containing the spread of Covid-19. In recent days, there have been heated debates on whether or not to ease the requirement, with some states supporting and others questioning it. 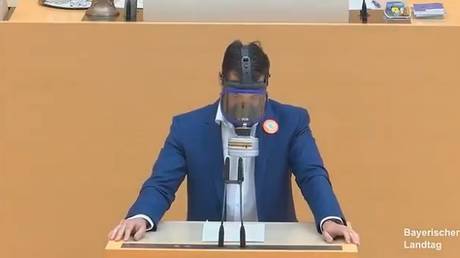