Britain, France and Germany have jointly warned against the US imposing further sanctions on Iran, saying it would have “adverse consequences” at UN level, though they agree an embargo on arms sales should remain in place.

“We firmly believe that any unilateral attempt to trigger UN sanctions snapback would have serious adverse consequences in the UN Security Council,” their joint statement read; it was released following a meeting between the nations in Berlin.

They also said sanctions against Iran would be “incompatible” with the Iran nuclear deal, which the nations are looking to “preserve.” They say the US’ strategy of “maximum pressure” is not the way to deal with Iran.

“We are convinced that we must address shared concerns about Iran’s nuclear program, its ballistic missile program and its destabilising regional activities in the long term. To this end, we continue to believe that the strategy of maximum pressure will not effectively serve this goal, and instead remain committed to holding Iran to account, while pursuing meaningful diplomacy and dialogue.”

The US withdrew from the Iran nuclear deal – or Joint Comprehensive Plan of Action (JCPOA) – in 2018 and imposed sanctions on Tehran’s oil exports, one of the country’s primary sources of revenue.

The US president has slammed Iran and claimed it has violated the rules of the JCPOA, which puts a limit on the nation’s nuclear activities and allows for international inspectors to enter the country and monitor them, in exchange for the lifting of sanctions.

Russia and China have also separately condemned the Trump administration’s strategy with Iran, as well as its abandonment of the 2015 JCPOA accord.

Trump’s administration has also voiced support for extending an existing UN weapons embargo on Iran, which is set to expire in October. If the embargo is not extended, the US has threatened a “snapback” of all sanctions against Iran, which would reimpose all UN sanctions on the country and likely dissolve the nuclear accord.

The UK, France, and Germany said in their joint statement that they are talking with Russia and China about the weapons embargo, admitting the lifting of the sanctions could have “major implications for regional security and stability.”

The countries say they want further discussions with Iran to bring them into “full compliance” with the nuclear agreement.

“We remain committed to the JCPOA and, in order to preserve it, urge Iran to reverse all measures inconsistent with the agreement and return to full compliance without delay.” 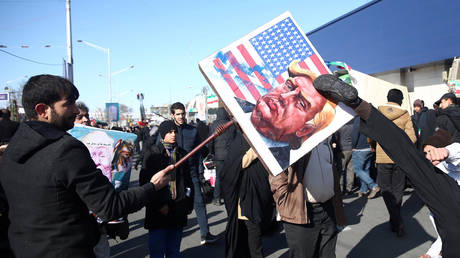 EU Parliament meddles into US affa...