Astronomers have captured the highest resolution near-infrared images ever of the Carina Nebula, using pioneering, ground-based technology and affording us an unprecedented view of an object 8,500 light-years away.

The images were captured using the Gemini South telescope in Chile and help us to better understand stellar nurseries, which are thick clouds of dust and gas, and how the stars they produce are born.

“The results are stunning,” said physicist and astronomer Patrick Hartigan of Rice University, citing unprecedented detail never observed before, including a series of ridges likely produced by a magnetic field, a smooth sine wave-shaped area and a series of fragments that appear to be ripped away by strong solar winds.

A stellar nursery is a dense mass of molecular hydrogen and assorted other gases, with a sprinkling of space dust, which collapses under its own mass and begins to ‘spin up,’ eventually creating a disc of material which feeds into a protostar before – boom, the sky is lit up once more as a star is born.

These stellar nurseries form in the Hubble telescope’s blindspots, as they are too dusty for a probe which operates primarily in the optical and ultraviolet wavelengths.

The Gemini South telescope can see in infrared and near-infrared wavelengths, but there’s just one problem: Hubble is in space while Gemini South is stuck here on Earth, where the atmosphere distorts images of objects so incredibly far away.

Atmospheric turbulence distorts and refracts light from distant stars, making ground-based observations somewhat limited in scope… until now, that is.

Thanks to the emerging field of adaptive optics, however, astronomers can now combat these distorting effects in real time, as their observations are ongoing.

The Gemini South Adaptive Optics Imager boasts five lasers which light up the sky with artificial “guide stars” that provide measurements against which researchers can offset the atmospheric distortion and clean up images of distant stars.

By tweaking and testing this technique, researchers were able to take images with a resolution ten times higher than previously possible before the advent of adaptive optics, or twice as sharp as Hubble images at this wavelength of light, even without the atmospheric distortion to account for.

“The new images of it are so much sharper than anything we’ve previously seen. They provide the clearest view to date of how massive young stars affect their surroundings and influence star and planet formation,” adds Hartigan of Rice University.

The James Webb Space Telescope will specialize in observations in the infrared and near-infrared wavelengths, so these ground-based observations serve as somewhat of a sneak peak at what we can expect when our most advanced space-based telescope finally takes to the skies in October 2021 (all going well). 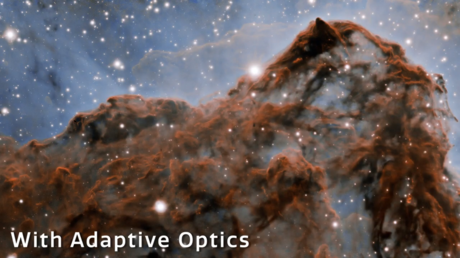