More than a dozen police officers were injured overnight after a riot broke out in the middle of the southwestern German city of Stuttgart. Shops were damaged and looted in the city center.

According to police, the unrest erupted around midnight when officers were conducting checks downtown in relation to suspected drug crime. Groups of people began confronting the police “in an extremely aggressive manner,” throwing rocks and paving stones, and smashing patrol cars. More than a dozen officers were injured.

“The situation is completely out of control,” a police spokesperson said on Sunday. “There was a real rampage.”

Rioters wore ski masks and other types of face coverings. They targeted many different shops in the area, breaking windows and looting. Several smartphone stores, a clothing store, and an ice cream parlor were among the establishments damaged.

The mayhem lasted for several hours until the situation calmed down after police reinforcements were called in, and a helicopter was deployed. More than 20 people were detained.

Stuttgart Mayor Fritz Kuhn said he was “shocked” by the violence and destruction, adding that there must be “no room for lawlessness” in the city.

Many countries, including Germany, have seen protests against racism and police brutality in recent weeks. The demonstrations were sparked by the death of an unarmed black man, George Floyd, in an attempted arrest by a white police officer in the US. Peaceful rallies were followed by rioting and looting in major American cities. 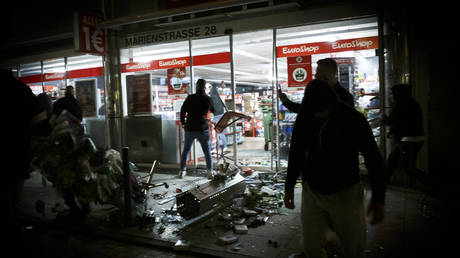 Australian AG outs himself as...

Italy shuts all schools in Cov...