Close
Trending News
HomeWorld‘A mistake’: US admits Kabul drone strike killed 10 civilians, incl. 7 children, and NO ISIS-K terrorists; no one will be punished

‘A mistake’: US admits Kabul drone strike killed 10 civilians, incl. 7 children, and NO ISIS-K terrorists; no one will be punished

‘A mistake’: US admits Kabul drone strike killed 10 civilians, incl. 7 children, and NO ISIS-K terrorists; no one will be punished

After weeks of insisting the August 29 drone strike in Kabul killed an ISIS-K terrorist, US Central Command has admitted that the victims were all civilians, including children, but reportedly won’t discipline anyone involved.

Marine General Kenneth McKenzie, head of CENTCOM, on Friday announced that the Hellfire missile fired at a home in Kabul just before the US airlift ended did not in fact kill a facilitator of Islamic State Khorasan (ISIS-K) terrorist group.

The drone strike in Kabul “was a mistake,” McKenzie said, acknowledging that “ten civilians, including up to seven children were tragically killed.”

The strike was ordered in “earnest belief that it would prevent an imminent threat to our forces,” but “it was a mistake and I offer my sincere apology,” he added, offering “profound condolences” to the relatives of those killed.

GEN Frank McKenzie admits ⁦@CENTCOM⁩ made a mistake, that innocent Afghans were killed, takes responsibility & then walks through what they think went wrong. Wish there was more of that in Washington. Conflict is chaotic and often tragic as in this case. pic.twitter.com/NlRCBkgxms

“No disciplinary action expected, officials say. US military stands by intel leading to strike.”
Dictionary definition of “impunity” for what is clearly a WAR CRIME. https://t.co/2P9f5BgHKj

McKenzie walked the reporters through the US decision to launch the strike, citing “over 60 pieces of intelligence” about an imminent attack by Islamic State Khorasan (ISIS-K), the terrorist group that claimed responsibility for the August 26 suicide bombing at Kabul airport, killing 13 US troops and 170 Afghan civilians. Half a dozen US drones monitored Kabul, and multiple intelligence reports spoke of a white Toyota Corolla being used as a car bomb.

Gen. McKenzie brings up a diagram of the area in Kabul that the U.S. had believed was a Toyota Corolla filled with explosives headed towards an attack on U.S. forces at HKIA. pic.twitter.com/9q3yos6Be5

General Mark Milley, chairman of the Joint Chiefs of Staff, said on September 1 that all the proper procedures had been followed, calling it a “righteous strike” and repeating the original CENTCOM claim that “secondary explosions” proved the targeted vehicle was loaded with explosives.

A New York Times investigation published on September 10, however, found no traces of secondary explosions in the courtyard of the targeted home. The white Toyota belonged to Zemari Ahmadi, who was not an ISIS-K terrorist but an employee of Nutrition & Education International, a US-funded charity. He had just applied for a visa to emigrate to the US with his family.

Ahmadi driving colleagues to and from work and bringing jugs filled with water to his home from the NEI office were flagged by the US as suspicious behavior. So when he pulled into the alley of his home and was greeted by half a dozen children that normally helped him park the car, a MQ-9 Reaper drone fired a Hellfire missile, killing them all.

The US airlift ended just before midnight on August 30, leaving the airport and Afghanistan to the Taliban. Ahmadi’s younger brother Emal, who spoke to RT a week after the attack, called the US “utter liars” for saying that the strike was aimed at ISIS-K.

“Without any proof, without any investigation, they attacked us and killed our children, and we will never forgive them,” said his cousin Jamshid Yousoufi, whose 2-year-old daughter Sumaya was visiting the family and died in the attack. 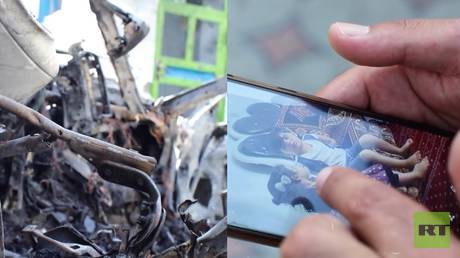