Major search and rescue operations continue along the French-Italian border after torrential flooding ravaged the mountainous areas near Nice. Seven bodies have been discovered as fears mount of more missing and dead.

At least 1,000 emergency services personnel, four military helicopters and a number of troops were dispatched to search for people in the mountainous region after Storm Alex struck on Friday.

The flash flooding swept away houses and roads, left some 10,500 homes without power and stranded dozens of people in high mountain passes who needed to be rescued via helicopter in a major cross-border operation by French and Italian emergency services.

To make matters worse, there are fears that far more people may be dead or missing than official figures might indicate, as mobile phone services are down in the region, hampering rescue efforts.

Five of the bodies have been discovered in north-western Italy, four of whom were found between the towns of Ventimiglia and Santo Stefano al Mare. Another body was found in a vehicle which had been swept away during a flash flood in the village Saint-Martin-Vesubie.

A total of nine people have been found dead after flash flooding hit the area on Friday, with almost a year’s average rainfall hitting the region in less than 12 hours.

Nice Mayor Christian Estrosi claimed over 100 homes had been severely damaged or completely destroyed in the floods. Italian firefighters rescued some 25 people who became trapped on the French side of a mountain pass due to flooding.

Meanwhile, European Commission President Ursula von der Leyen, self-isolating after contact with a Covid-19 positive person, tweeted her support for all of those affected by Storm Alex in France and Italy, adding that both nations had the full support of the EU.

“Solidarity with all those affected by bad weather in northern Italy. The European Copernicus satellite has been activated. We are ready to provide further assistance in this difficult time. Italy can count on our full support,” she said.

“The Alpes Maritimes were severely affected by storm Alex. The European Union is wholeheartedly with France. The European Copernicus satellite was activated to help the civil protection authorities on the ground. We are ready to provide further assistance as needed,” von der Leyen added. 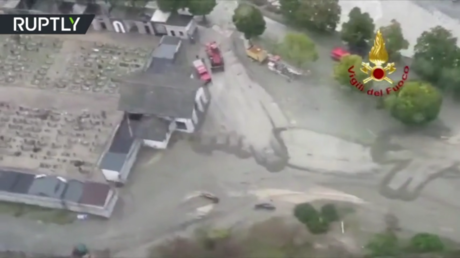