69 inmates flee in massive prison break in Lebanon, 5 killed as their car hits tree during chase

69 inmates flee in massive prison break in Lebanon, 5 killed as their car hits tree during chase

A largescale manhunt is underway in Lebanon as dozens of inmates managed to escape from a prison facility. Some of the fugitives have already been captured or surrendered, while five died after crashing a stolen car into a tree.

A total of 69 people managed to break open their cells and flee a prison in the city of Baabda, western Lebanon, on Saturday at dawn, according to security forces.

The prison break prompted a manhunt, with 15 fugitives being apprehended and two others surrendering to the authorities several hours after the escape.

A dramatic chase involving the inmates and the police ended in tragedy. A group of fugitives hijacked a Dacia car from its driver in an attempt to lose the cops, but the man behind the wheel lost control of the vehicle and crashed the packed car into a tree. The accident left five people dead and one wounded.

More than 40 fugitives currently remain at large, with the authorities asking the public to report any information on them. The circumstances of the prison break are being investigated.

Earlier this year, Amnesty International sounded the alarm over the harsh Covid-19 situation in overcrowded Lebanese prisons. There were riots by inmates and sit-in protests by relatives demanding the release of the prisoners, the group said. 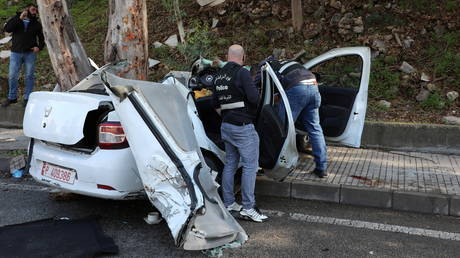