German prosecutors have charged six men over the largest heist ever recorded in the country, at Dresden’s Green Vault museum in 2019, when the robbers stole some €113.8 million ($135 million) worth of historical jewellery.

Public prosecutors in Dresden on Thursday filed charges against six German men, all in their 20s, accusing them of aggravated gang theft and severe arson, among other charges.

Although the investigators have not formally named the suspects, police stated during their manhunt that the men were believed to be members of the notorious Arab “Remmo clan”. Two of the accused had already been convicted for stealing a giant 100kg (220 pounds) gold coin from Berlin’s Bode Museum in 2017.

The six are suspected of breaking into the Green Vault museum in Dresden in the early hours of November 25, 2019, while armed with a loaded revolver and an automatic gun with a silencer. Having gained entry, the gang robbed 21 pieces of precious jewellery studded with over 4,300 diamonds, estimated to be worth €113.8 million ($135 million).

Besides the loss of the artifacts, property damage amounted to more than one million euros. Investigators also claim that the accused started a blaze to cut power to nearby streetlights before the break-in, as well as setting fire to a car in a garage nearby.

Efforts to recover the stolen goods have proven fruitless, with investigators still searching almost two years later. According to the prosecutors, the hunt for other potential participants is also ongoing.

The Green Vault, housed in Dresden’s Royal Palace, is one of the world’s oldest museums. The treasure trove was created by Saxon ruler August the Strong in the 1720s and boasts an array of 18th century trinkets, jewels, and artwork. 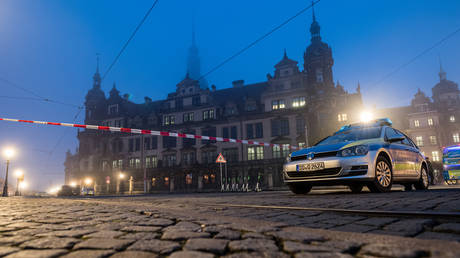 ‘He will remain a champion’: Ukrai...

With Merck charging US governm...

Taliban calls for improved ‘diplomatic relations’ with US after ‘candid talks’ in Doha, welcomes humanitarian aid