At least one person was killed, and a coronavirus quarantine center damaged, after a 6.6 magnitude earthquake shook the Philippines on Tuesday.

The country’s strongest earthquake in eight months struck at sea at a depth of 30km (18.64 miles), according to the European Mediterranean Seismological Center.

It damaged a hospital and a sports complex being used as a novel coronavirus quarantine center in Cataingan – a central town with a population of more than 50,000 people – which was near the epicenter of the quake.

Patients were moved out into tents because of cracks in the building, Provincial Administrator Rino Revalo told local radio station DZMM. He also said that the damaged sports complex will be checked to see if it is safe to accommodate people staying there in quarantine after coming back from the capital. People returning to their homes in the provinces from the capital Manila currently must spend time in isolation.

A public market, a seaport, and houses built using light materials were also damaged in Cataingan, according to authorities, while roads and bridges were cracked. Witnesses saw walls splitting and collapsing.

After the earthquake, the Philippines seismology agency said there was no risk of a tsunami. However, it warned of the possibility of aftershocks.

With a population of 107 million, the Philippines has the most coronavirus cases in Southeast Asia. Authorities have reported more than 164,000 confirmed infections and 2,681 deaths. 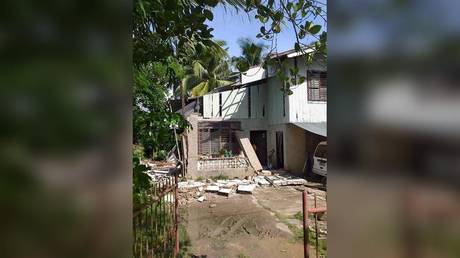