Israel’s health minister, Yuli Edelstein, has announced that the country has now inoculated 50 percent of the country’s population of 9.3 million with at least one dose of a Covid-19 vaccine.

The Israeli government also announced that 35 percent have received both doses of the Pfizer jab, which the nation is using for its vaccine rollout, allowing officials to begin reopening some parts of the economy to people who have been given at least one dose.

The vaccine figures follow the release of a study of the Pfizer Covid-19 vaccine in Israel, looking at 1.2 million people who were vaccinated in the last two months and finding that symptomatic cases among individuals who had received both doses fell by 94 percent.

However, there is still some uncertainty about how effective the Pfizer vaccine, and others, are at protecting against new variants of the virus, such as the South African or Kent strains, which have proved to be more infectious than the early stage of the virus.

The country recently launched a Covid-19 Green Pass, which allows people who have recovered from coronavirus or been vaccinated against it to enter places or facilities, as life returns to normal.

On Wednesday, Israel held one of the first publicly-attended cultural events since the pandemic began, with an open-air concert taking place in Tel Aviv. Attendance was limited to only those who had the Green Pass, which is valid for six months from the point of vaccination, and gave an insight into post-pandemic life in Israel. 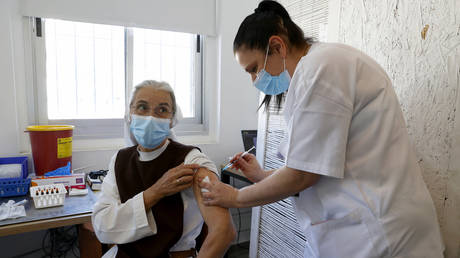 Europe must hurry up with Covid-19...

US strike in Syria at Biden's...