Multiple police officers and members of South Africa’s defense forces have been deployed to deal with a hostage drama that saw at least five people killed and 30 arrested in the small town of Zuurbekom on Saturday.

A group of gunmen broke into the International Pentecost Holiness Church earlier in the day, attacking people inside, national police spokesman Vish Naidoo told local media. The gun-wielding men “were coming to take over the premises,” the police official suggested, revealing some harrowing details of the attack.

The assault on the church saw four people shot and burnt to death in a car, Naidoo said. The fifth victim, a security guard, was shot dead in his vehicle. The armed gang had apparently taken hostages inside the church.

Authorities responded to the high-risk call shortly afterwards, dispatching police rapid response teams and sending in army reinforcements. The first responders managed to handle the crisis, detaining 30 suspects and seizing as many as 25 firearms, police are reporting.

Notably, police officers themselves as well as soldiers and correctional service officials were reportedly among those detained. It is as yet unclear if law enforcers and members of other services were actually perpetrators or bystanders in the deadly shooting incident; officials have so far given no explanation as to why they were arrested.

Later in the day, members of the police Special Task Force, Tactical Response Team, and Visible Policing force combed the church building, rescuing men, women and children that reportedly were living in the compound. Roughly 200 people were held hostage, local media have estimated.

Law enforcers believe the dramatic shootout could be part of a simmering dispute over the leadership in the IPHC, said to be one of South Africa’s most popular churches.

Back in 2018, another confrontation occurred between rival factions, who also used firearms to prevail over opponents. No one was killed in that standoff, though three people were injured. 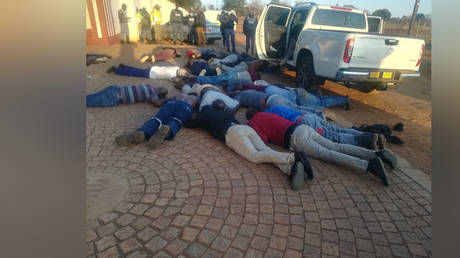