Ireland’s medical system is stretched, its prime minister has said. The new fast spreading Covid-19 variant accounts for almost half of new cases there, while seasonal indoor gatherings also contributed to rapid transmission.

The more infectious strain of coronavirus, first detected in England, now accounts for almost half of new cases in Ireland. Premier Micheál Martin said health authorities had told him the new Covid-19 variant has shown up in 45 percent of positive tests last week – up from 25 percent two weeks earlier.

Speaking on Irish radio on Monday, Martin said the rise of the UK variant, increased socialization over the Christmas period as well as the seasonality issues of people gathering indoors had created a ‘perfect storm’ for the spread of the virus.

Deputy prime minister Leo Varadkar said Monday that Ireland was “in the middle of the third wave of the pandemic,” adding that health officials were “better prepared.” He said it was likely that restrictions limiting movement and exercise would be in place until the end of February.

Ireland has the worst coronavirus infection rate in Europe and recorded 45,000 new cases last week, according to Johns Hopkins University and the University of Oxford.

Across Ireland, some 4,500 health-care and nursing-home staff are unable to work because they have the virus or are self-isolating. Because of that, some 600 beds that would normally be available to treat coronavirus patients are now unavailable, a senior health official told Irish radio.

This week will see the vaccination of all residents and staff in nursing homes, with 68,000 vaccines expected to be administered by next Sunday.

According to Ireland’s Department of Health, there were 6,888 new cases reported on Sunday with eight deaths from the virus. So far, there have been 147,613 cases reported with 2,344 deaths, out of a population of more than 4.9 million. 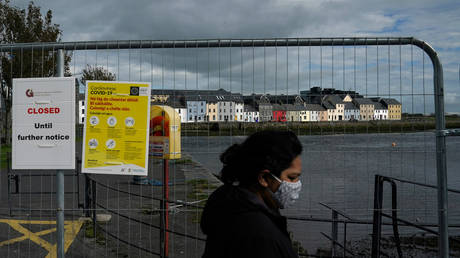