At least 41 people have been injured in Bangkok, the city’s Erawan Emergency Medical Centre said, as protests pushing for constitutional reforms escalated in the Thai capital on Tuesday amid reports of live ammunition being fired.

A police officer was among the injured, the hospital said, with a dozen people affected by tear gas and five reportedly sustaining gunshot wounds.

Clashes break out at anti-government protest in #Bangkok, #Thailand pic.twitter.com/oBoHHH8Z6S

Thousands of people faced off with police in the Thai capital on Tuesday for the latest round of protests, as they demanded the removal of Prime Minister Prayuth Chan-ocha and for the expansive powers of King Maha Vajiralongkorn to be limited. The protests have been running since July, and Tuesday’s unrest also involved scuffles between those pushing for reform and counter-protesting royalists.

Officers fired a water cannon at some demonstrators who had cut through razor-wire barricades and reportedly taken a water cannon truck stationed outside parliament, where MPs were discussing changes to the constitution, which may affect the role of the monarchy.

Protesters have broken through one of the police lines and have taken a water cannon truck. Police have retreated from this position. #ม็อบ17พฤศจิกา #รับทุกร่างคือทางออก pic.twitter.com/cedTc3wVWy

Fighting between yellow-shirted royalists and protesters from the youth-led pro-reform movement was also reported, with social media videos appearing to show scuffles near a footbridge and people hurling rocks.

20.20h: Clashes between royalists and reformists have briefly flared up again at the Kiak Kai intersection. A loud bang and smoke can be heard in this clip. Situation tense but calm now, medics rushing to the scene. #ThaiProtest2020 #ม็อบ17พฤศจิกา #ประชุมรัฐสภา https://t.co/M9qH3j91cD

In some local news footage, medics could be seen rushing stretchers bearing some of the wounded through crowds of protesters. Some images circulating on social media purported to show an injured child being taken away for medical attention.

Unverified videos posted to social media appeared to show bullet casings on the ground and live rounds being fired. As well as demonstrators with gunshot wounds.

Deputy Commander of the Royal Thai Army Piya Tavichai denied that the authorities had deployed any live rounds at the protests, and said only rubber bullets had been used, in order to disperse crowds. 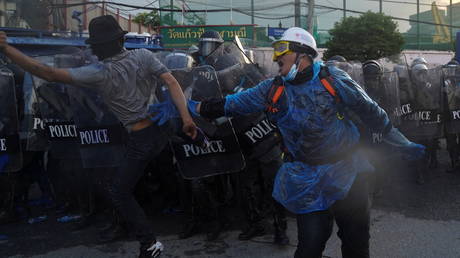