Close
Trending News
HomeWorld3rd draft of Belarusian constitution in the works, Lukashenko reveals, says ready to hand over powers by law & not under pressure

3rd draft of Belarusian constitution in the works, Lukashenko reveals, says ready to hand over powers by law & not under pressure

3rd draft of Belarusian constitution in the works, Lukashenko reveals, says ready to hand over powers by law & not under pressure

As political turmoil looms large in Belarus, its freshly reelected President Alexander Lukashenko said work is underway to get the third iteration of the country’s constitution ready for a potential popular vote.

There have been two drafts of the country’s governing law, but both have been shelved as they offered nothing new when compared to the document in force, President Lukashenko said during a rally at a Minsk truck factory.

“We do need a new constitution. I was offered two versions. I rejected them because they differ little from this one,” he told the media. Now, “work is underway on a third version,” the president revealed.

The news comes as people across Belarus are rallying against Lukashenko’s reelection, with opposition figures insisting the August 9 vote was rigged and unfair. Protesters demand that Lukashenko step down and give way for a new election; the president himself says he is not against the change – but that it should proceed without coercion.

“We’re putting it for a vote, adopting the constitution, and I’m handing over my powers according to the constitution,” he offered. “But not under pressure and not through street [action]!”

The current edition of Belarus’ constitution was adopted back in 1994. It was amended on several occasions, with critics saying the changes helped Lukashenko cement power and silence dissent – a claim he has consistently denied. 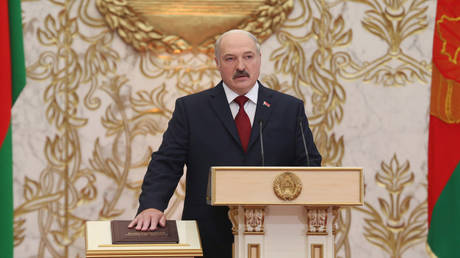