The Saudi government has threatened its own citizens with a three-year travel ban if they undertake trips to countries deemed unsafe by the kingdom’s authorities due to the prevalence of Covid-19.

On Tuesday, Saudi Arabia’s Interior Ministry said that travel to prohibited countries was a serious violation of Covid-19 restrictions.

“Anyone who is proven to be involved will be subject to legal accountability and heavy penalties upon their return, and will be banned from travel for three years,” the ministry posted on Twitter.

An interior ministry source told state news body the Saudi Press Agency that the ministry has been made aware of some people travelling to ‘red list’ countries and will “expose” anyone who is guilty. The punishment for such actions, the three-year travel ban, will be given to the traveler on their return.

“The Ministry of Interior stresses that citizens are still banned from travelling directly or via another country to these states or any other that has yet to control the pandemic or where the new strains have spread,” the official added.

Last week, the Saudi government said that citizens must be fully vaccinated against Covid-19 if they want to travel abroad, in a further effort to limit the spread of infection. The measure will come into force on August 9, but excludes those under the age of 12.

According to Our World in Data, just over half the Saudi population have received one shot, while less than 20% have received both jabs. 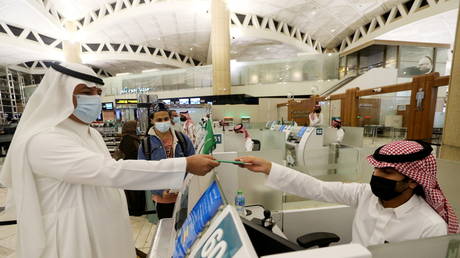