Biotech firm Moderna has said its Japanese distribution partner will recall three lots of its Covid-19 vaccines after a fourth batch of the company’s shots were found to be contaminated with particles of stainless steel.

On Wednesday, the Japanese health ministry confirmed that the contaminants found in Moderna shots were particles of stainless steel and were unlikely to pose any health risks.

Moderna’s domestic distributor in Japan, Takeda Pharmaceutical Co, reiterated the findings in a statement, noting “stainless steel is routinely used in heart valves, joint replacements and metal sutures and staples. As such, it is not expected that injection of the particles identified in these lots in Japan would result in increased medical risk.”

Despite the lack of perceived health risk, Moderna said that Takeda would be recalling three lots of the vaccine that were suspended from use due to contamination. Last week Japan halted the distribution of some 1.63 million doses of the jab, with the media reporting that the contaminant was apparently metallic.

On Tuesday, Japan reported fresh cases of contaminated Moderna shots. Kanagawa prefecture said that black particles were observed in vials, triggering the suspension of the whole batch. It was the fourth such incident in less than a week.

An investigation to find the source of the particles has been launched by European safety regulators, Moderna and Spanish bottling company Rovi. Takeda, citing the probe, said that the most probable explanation was related to friction between two pieces of metal in the instrument used to put stoppers in bottles. The instrument is made from grade-316 stainless steel, it was confirmed.

Rovi has taken preventative measures, Takeda said in the statement.The use of the Moderna vaccine has now been suspended elsewhere in Japan despite other lots appearing to be clear of the contaminant. The suspensions have sparked concern that Japan’s already lagging vaccination campaign may suffer further. 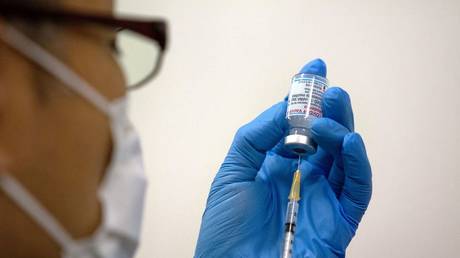 Lebanon in COMPLETE DARKNESS a...

US will seek to facilitate eva...