The attack took place in the early hours of Wednesday as the city was plunged into darkness.

“At about 3:11 am this day, the Zionist enemy launched an air aggression from the direction of the occupied Syrian Golan on the southern region,” SANA reported, citing a military source.

Explosions rang out in the skies over the Damascus area, and air defenses intercepted “a number of missiles,” it added.

The attack claimed the lives of three soldiers, according to the military source. One serviceman was injured. The incursion has also inflicted material damage.

#BREAKING #NOW
Israeli warplanes target sites in the vicinity of the Syrian capital #Damascus, and the Syrian regime’s anti-air systems are trying to intercept this attack.#Syria #Israel #IDF #IAF https://t.co/1XW0ORLhKa

Shortly after first reports came in, Israel claimed responsibility for the attack on the Syrian armed forces, saying it was carried out in retaliation for them and Iranian Quds Force allegedly placing explosive devices to hit Israeli troops in the Israeli-controlled part of the Golan Heights.

What Iran & Syria did: placed improvised explosive devices by the Alpha Line to hit Israeli troops.

We stand prepared to operate against Iranian entrenchment in Syria.

While Tel Aviv rarely confirms military operations outside of its own territory, Israel has routinely targeted what it claimed were “Iranian” and Hezbollah targets inside Syria under the pretext of preventing Tehran from gaining a foothold in the war-ravaged country.

On Tuesday, IDF nnounced that they uncovered “a number of explosives devices” near the Israeli-controlled part of the occupied Golan Heights, vowing to “not tolerate any violation” of its “sovereignty”.

We just exposed a number of improvised explosive devices (IEDs) near the Israeli side of the Alpha Line on the southern Golan Heights.

We hold the Syrian regime responsible for all events in Syria and will not tolerate any violation of our sovereignty. pic.twitter.com/JoWR2JNM89

The area is made up of land captured from Syria by Israel during the 1967 Six-Day War, but is recognized as Israeli territory by only Israel and the United States. 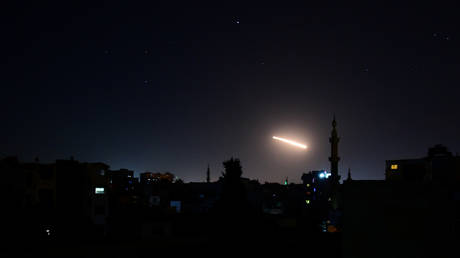