A second French mayor has apparently been threatened with “beheading” just days after the gruesome murder of a schoolteacher over cartoons of the Prophet Mohammed. The ominous threat was sprayed on the walls of a school in Lyon.

“The mayor of the 8th, we’ll behead your head [sic],” the graffiti read, referring to the eighth district of Lyon and its elected official, Olivier Berzane. Unambiguous threats were also made to cut off the heads of teachers and students.

Mayor Berzane said he has already filed a criminal complaint over the offensive messages, vowing to pursue those who wrote them, as “no one takes these threats lightly.”

“It is out of the question to let such an act go unpunished. It is necessary to find the perpetrators,” Berzane told local media.

These words are disconcertingly stupid and unspeakable. It’s pure hatred. Is it an isolated act of someone not knowing what to do with their evening, or a serious threat? Anyway, it’s a case of extreme violence.

While the threats might have been, as Berzane suggested, an “isolated act,” they came only a day after the mayor of Bron, near Lyon, received a similar warning. The graffiti in that case also threatened the town’s elected official with beheading. Mayor Jérémie Bréaud denounced the “violent writing,” and France’s Interior Minister Gérald Darmanin directed the police to “take legal action and provide protection.”

This series of threats against local politicians comes a week after Samuel Paty, a schoolteacher in the Parisian suburb of Conflans-Sainte-Honorine, was beheaded in the middle of a street. He was slain by a hardline Islamist suspect of Chechen origin, supposedly as a punishment for showing “offensive” cartoons of the Prophet Mohammed during a lesson on free speech. The teenage attacker was apparently born in Moscow, as the media was quick to point out, but his family emigrated to France in the 2000s, and the young man applied for asylum and effectively grew up there. 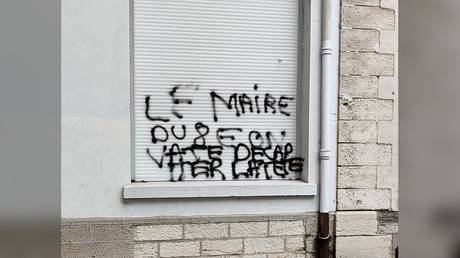