A massive police operation in Rio de Janeiro’s Jacarezinho slums resulted in the death of two dozen suspected criminals, one officer, and several injured police and civilians – including subway passengers caught in the crossfire.

More than 200 Brazilian police officers raided the third-largest favela in Rio, home to over 60,000 residents, on Thursday morning. Local media reported heavy gunfire and explosions in Jacarezinho, and spoke of rifle-armed militants jumping across roofs to escape the police.

One of the casualties was police inspector Andre Leonardo de Mello Frias, the civil police of Rio de Janeiro confirmed. There were 24 other fatalities in the raid, but their identities have not been released at this time.

At least five people were injured – two police officers, a resident hit by a stray bullet inside their home, and two subway passengers who were on board the Line 2 car headed for Triagem station at the time of the gunfight.

Dramatic video from the subway shows passengers cowering in fear after the bullets struck the car. Another, taken at the station afterward, shows a man tending to a head wound.

Police were targeting Comando Vermelho (Red Command), a criminal organization suspected of drug and weapons trafficking. According to the newspaper O Globo, Thursday’s raid followed court-authorized surveillance that identified 21 criminals who were using force to keep parts of the slum under their control. The organization had hundreds of “soldiers” armed with rifles, pistols and hand grenades and wearing body armor, police said.

Jacarezinho’s narrow alleys, barricaded by the criminals, made the use of armored vehicles impossible, O Globo reported. Police used helicopters instead. Three Covid-19 vaccination posts, including a family clinic, were temporarily closed due to the raid.

Thursday’s raid was the first major operation against organized crime since last June, when the Brazilian Supreme Court said such raids should be halted during the Covid-19 pandemic save in “absolutely exceptional cases.”

It was the deadliest police raid since 2016, when the digital platform Fogo Cruzado (crossfire) began tracking armed violence in Brazil.

“Unfortunately, the war scenario imposed by these gangs demonstrates the importance of operations so that criminal organizations do not get stronger,” the police said in a Facebook post. 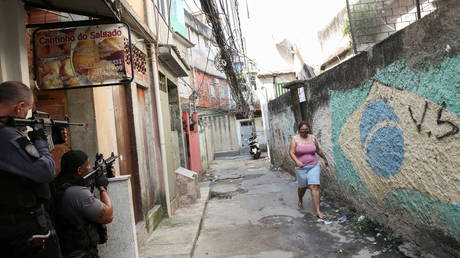 Boris Johnson gears up for ‘do-or-...